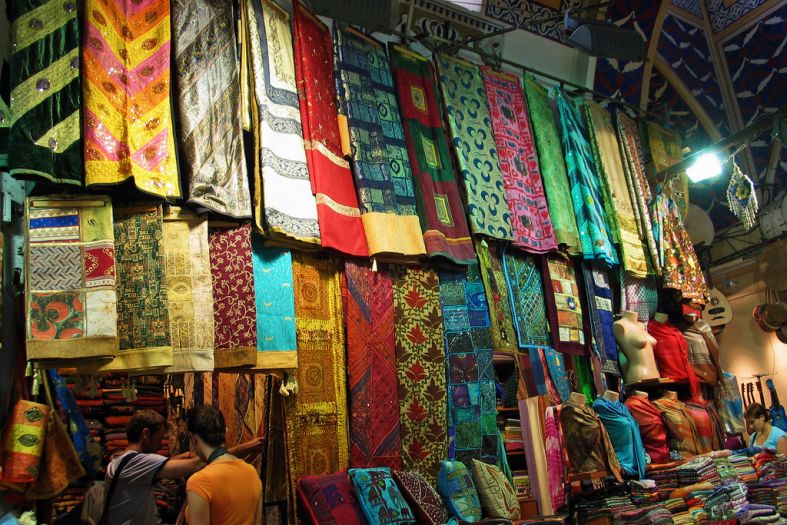 Kapali Carsi in Istanbul, meaning “Covered Bazaar”, also called The Grand Bazaar, is a place that will leave a permanent mark in your mind with its sounds, colors and smells. It is complete craziness – from all directions you get called out and stopped by the merchants with their irresistible offers. This is not so much a place for shopping, as it is for bargaining and outsmarting, gawking and taking in the charm of oriental markets. This over 650-year-old market, with more than 5000 shops, is where you can live to tell the story of believable and unbelievable occurrences.

1. Perhaps the first thing that will happen to you, after just a few steps, is to feel disoriented (meaning lost) and confused (meaning lost again) by the heaps of merchandise, the crowds of people, entangled corridors, and all of those merchants, who are so determined to talk to you.

2. At The Grand Bazaar you will hear all sorts of languages. The merchants have evolved into polyglots, who do not simply try to convince you in the advantages of their products, but do it in your own language. This can be useful, if you have actually come here to haggle and shop, but could also be a downside, if all you want to do is window shop and pretend like you don t speak foreign languages. None of that here. As soon as the merchants hear you speaking in German, they will throw their arms around your shoulders with the cheer “Guten tag!”, which is followed by 10 unescapable minutes of chit-chat. We have first-hand experience, that the merchants are also somewhat versed in French, Spanish, Russian, Chinese, Japanese, Italian… So you can try and pretend that the only language you know is Swahili, in the hopes of relative success.

3. It is highly likely that you will be swept away by the crowd. Even though Kapali Carsi is one of the biggest indoor markets in the world (some claim it is actually the largest), it will seem tiny, if you happen to be somewhere around the entrances at the time when a few tourist buses drop off their passengers simultaneously. You will have nowhere to hide, even if you stick to the wall, the crowds will sweep your forward, and your mind will involuntarily produce images of bison herds in the American prairie.

4. If you haven t read the market s story before arriving, you can get educated on the spot. All you have to do is look up – the market s history, along with some curious facts, has been inscribed, in English, on dozens of small signs, hung high above your head. In the meantime, make sure to also keep an eye on your belongings.

5. More often than not, the price of that amazing scarf you fell in love with, is up to twice higher, than what it is really worth. So you can bargain the price down, while keeping a clear conscience, until the price shrinks to half of what it first was. Once you have already agreed on a price, it is considered rude to keep haggling. If you decide not to buy after all, thank the merchant and leave guilt-free – after all, this is what sellers at The Grand Bazaar do all day.

6. The market closes down at 7 PM. It s like clockwork. Stay, and you will see how in the span of only a few minutes, the corridors become deserted, the shops are locked down, and you find yourself amongst the last few visitors, struggling to find their way out.