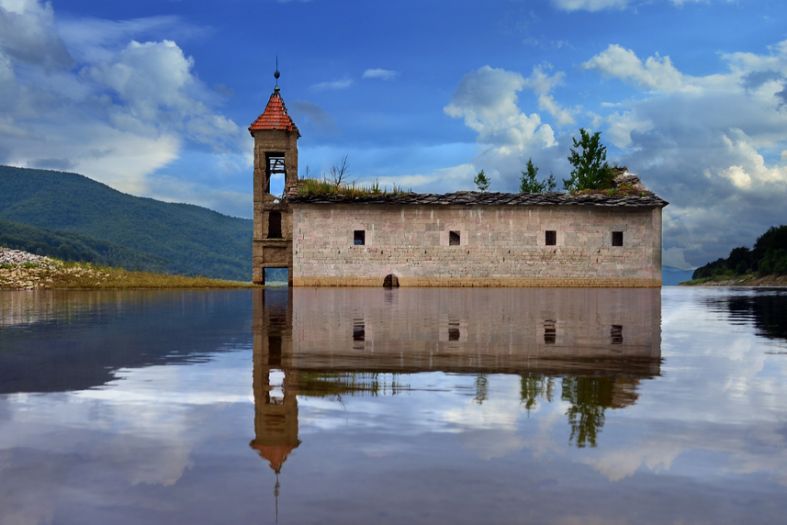 7 best submerged churches to amaze you

203 Challenges 0 March 8, 2022 6:42 pm
Taxi in Cuba – three real stories and a few tips on haggling
The art of traveling non-alone (an introvert’s guide)
The 6 most common life-changing decisions we make while traveling

Mankind is equally good at building and destroying, erecting and sinking to the ground. If we look at churches as the symbol of spirituality and humility, there are a few places around the world, where humility is… submerged under water.

The stories that follow have one thing in common – they are about temples (some of them 4-5 centuries old), which ended up as lonely isles of destruction. From Macedonia, to Germany, Russia, and Brazil, the construction of dams and reservoirs leaves churches under water. Today, after so many years, these ruins are both eerie and beautiful, which is why they attract travelers with a passion for the unusual.

Here are 7 places to visit, if you enjoy non-mainstream destination and unusual stories. 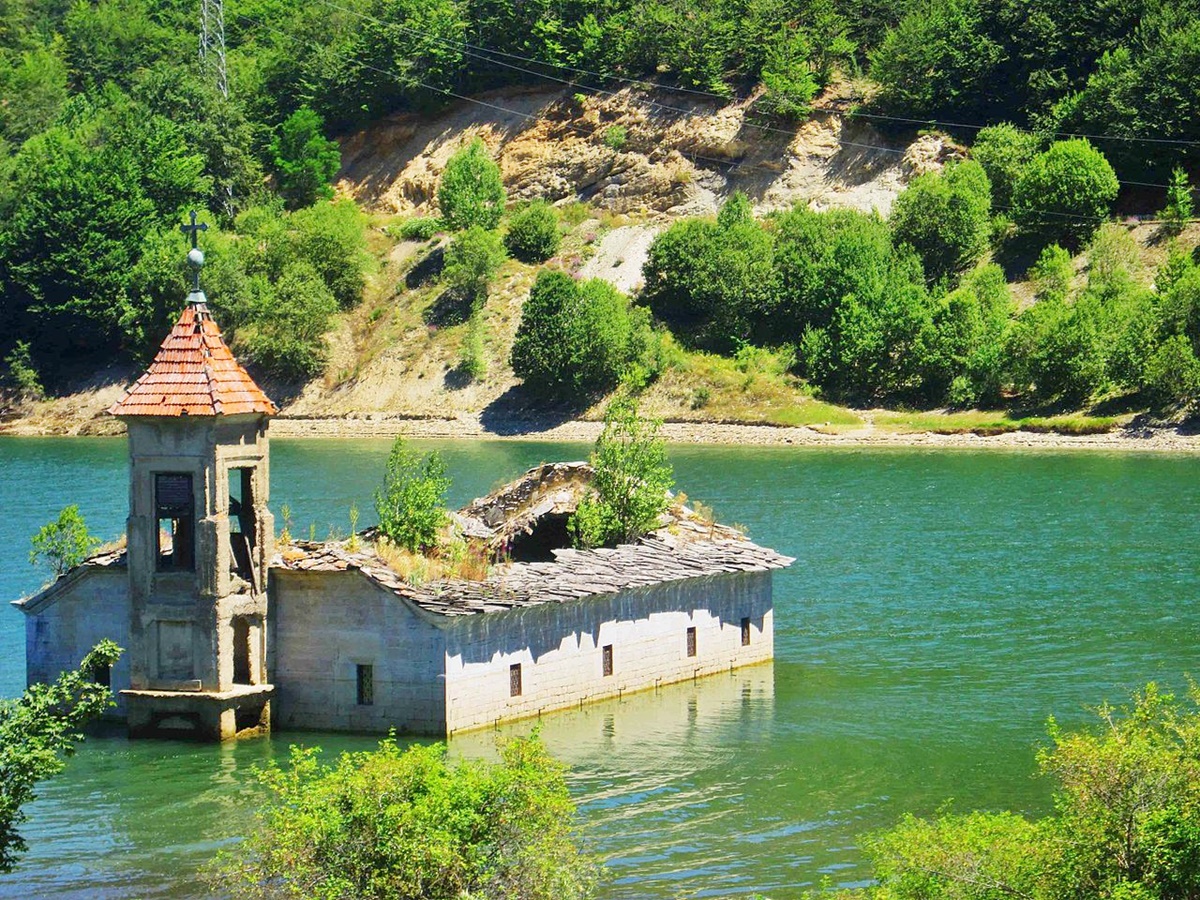 The church in Mavrovo, Macedonia

The “St. Nicholas” church was built in 1850 and, for 153 proud years, stood by the Macedonian village of Mavrovo, until it was decided that a dam would be built in the area. There are times of the year, when the church is completely submerged and cannot be seen, but it resurfaces again and again. You are most likely to see it if you visit the region during a dry summer, like the last few ones. 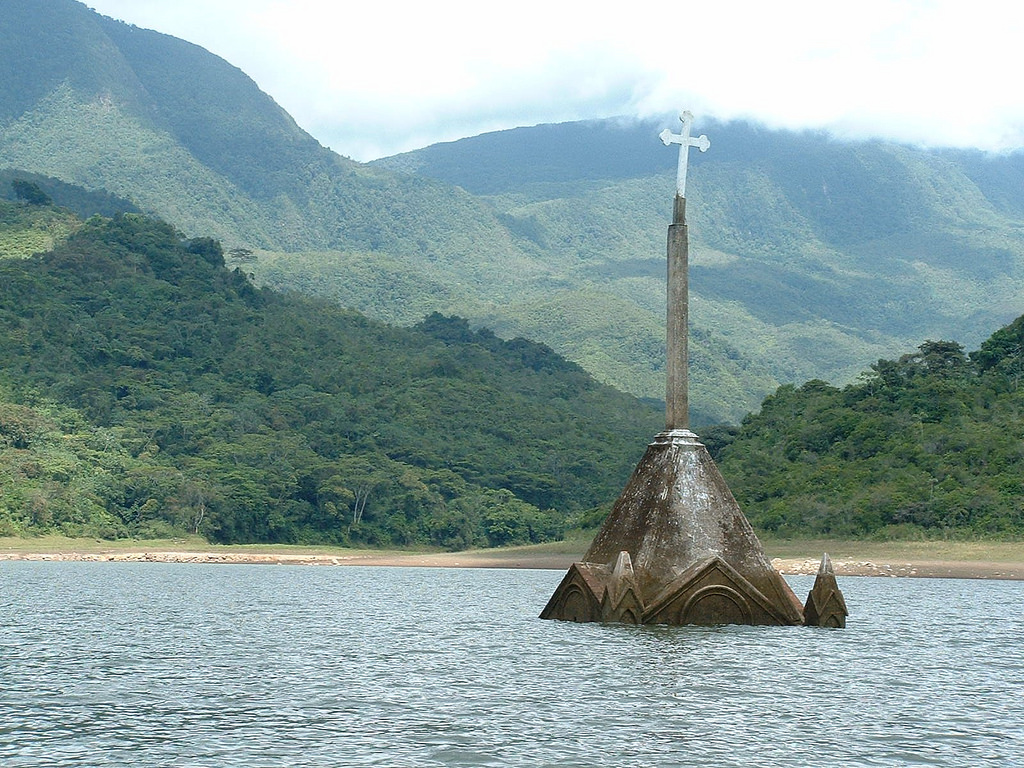 The only thing left of the church in the Venezuelan city of Potosi, is the cross atop its bell tower. All of the city’s inhabitants fled, after it became clear that the government had decided to build the La Honda dam here. According to those who once resided in the city, in 1985 Venezuela’s president at the time – Carlos Andres Perez, came to the city and simply told the people that if they do not leave their homes, they would be forced out. 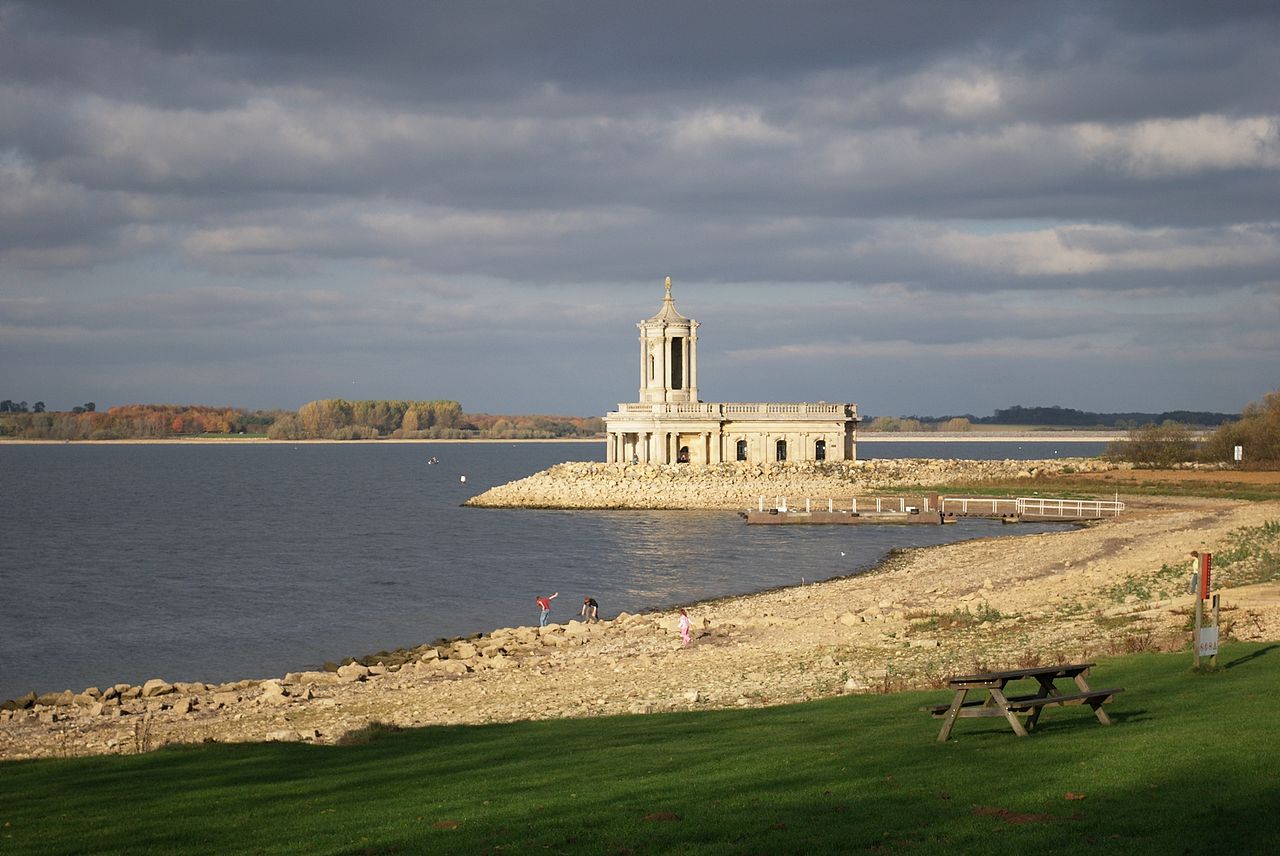 Rutland Water is the name of a dam, near Normanton, UK. This strange church is currently halfway under water. This is yet another place, that used to be a settlement, and was submerged due do the building of a dam. This church, however, was saved in an unusual way – its floors were raised with about a meter and, when inside, you realize how weirdly low the windows, ceiling and altar seem… Not only is the church open to visitors, but it is also fully functional and often becomes the ground for wedding ceremonies.

The submerged church near Petrolandia, Brazil

Petrolandia is a city in Brazil, which currently has about 30,000 residents. It is located near the banks of the Sao Francisco River. As is the case with many of the other churches in this list, in the past, a portion of the city was submerged so that a dam could be built in its place. The only remaining structure of what once was a city, is now the half-ruined church. This rundown structure looks unreal, but also spectacularly beautiful – it resembles a huge fish, with its mouth open, awaiting tasty visitors. 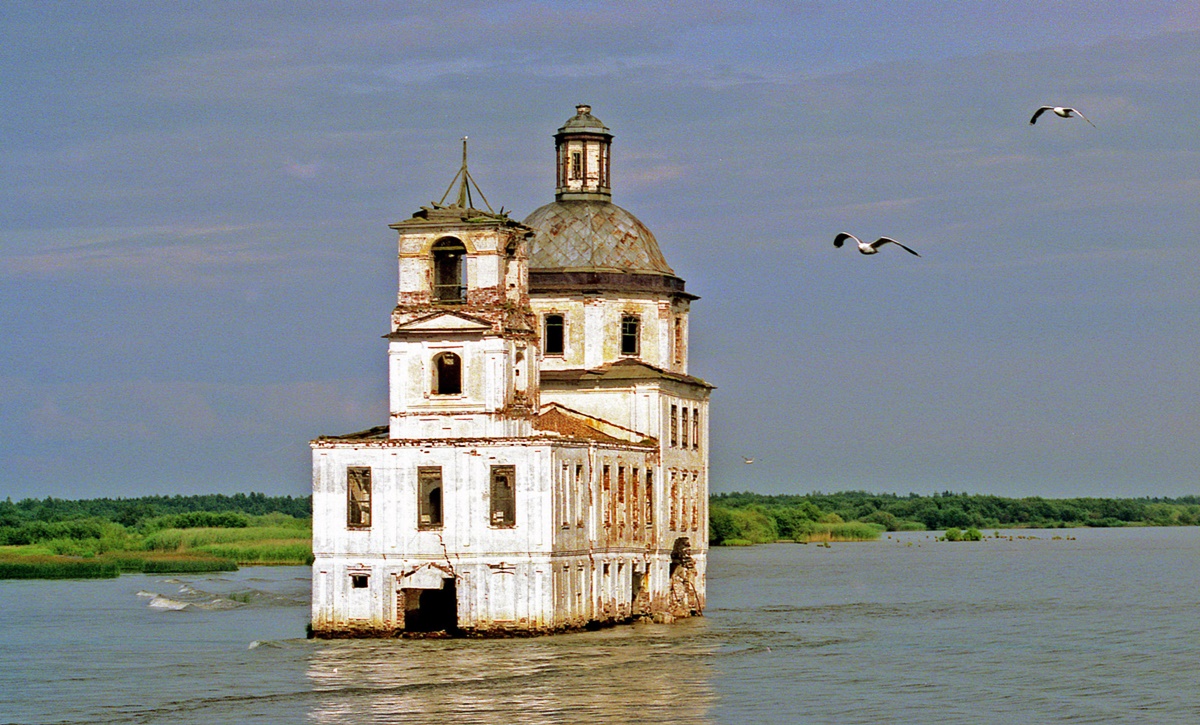 The submerged church in Krokhino, Russia

Once upon a time, this church was of interest because of its beautiful design, but today it has a much different, eerie appeal. The church in Krokhino is located at the border of the Sheksna River and the White Lake. The temple was built in the 15th century but during the 1980s the socialist government decided to construct a hydroelectric power station in its place. Today, what remains of the church has been turned into a tourist attraction, normally visited by boat. There have been several campaigns, whose mission is to save what is left of the building from full devastation. 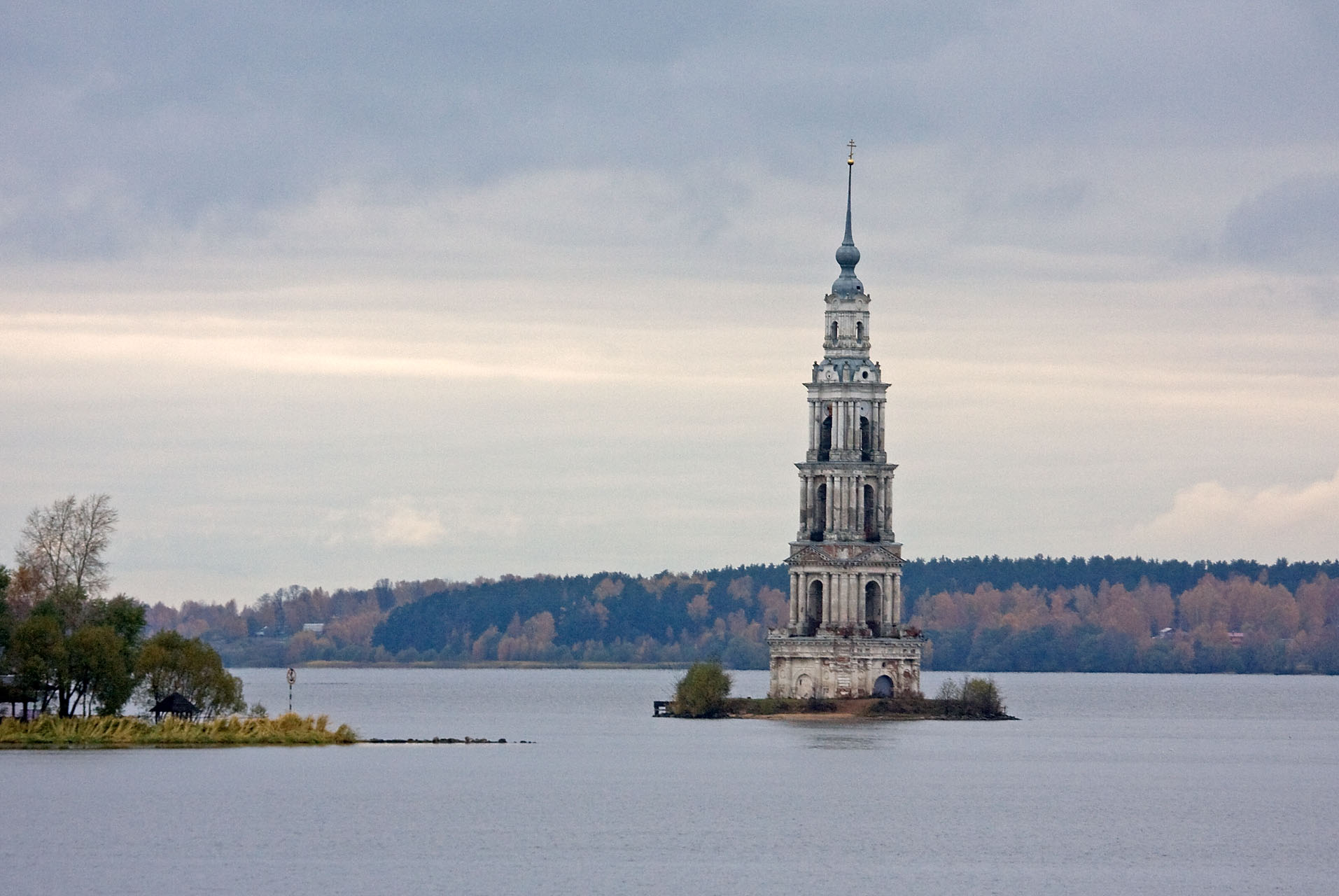 The Belfry in Kalyazin, Russia

Ever since 1939, the belfry of the church in Kalyazin has been casting its shadow on the waters of the dam of the Volga River. This is the year when Stalin ordered the entire region, along with the monastery and the village next to it, to be submerged under water. Gradually, however, especially in the last few years, the location is becoming an increasingly popular tourist destination (not only for Russian visitors, but also for international ones), which is why the government decided to strengthen what is left of the bell tower, and add a small pier for the visitors boats.

At the bottom of the man-made lake Lago di Resia (Reschensee in German) in Italy, you can see a submerged church from the 14th century. Today, the only part of the structure above water is its bell tower near the town of Curon Venosta. In the winter, when the lake freezes over, you can reach the bell tower by foot. According to the legend, sometimes, during the winter, you can hear the church bells ringing. However, that’s somewhat doubtful, since the bells were removed in 1950, when the main part of the church was demolished and a dam was built a week later.