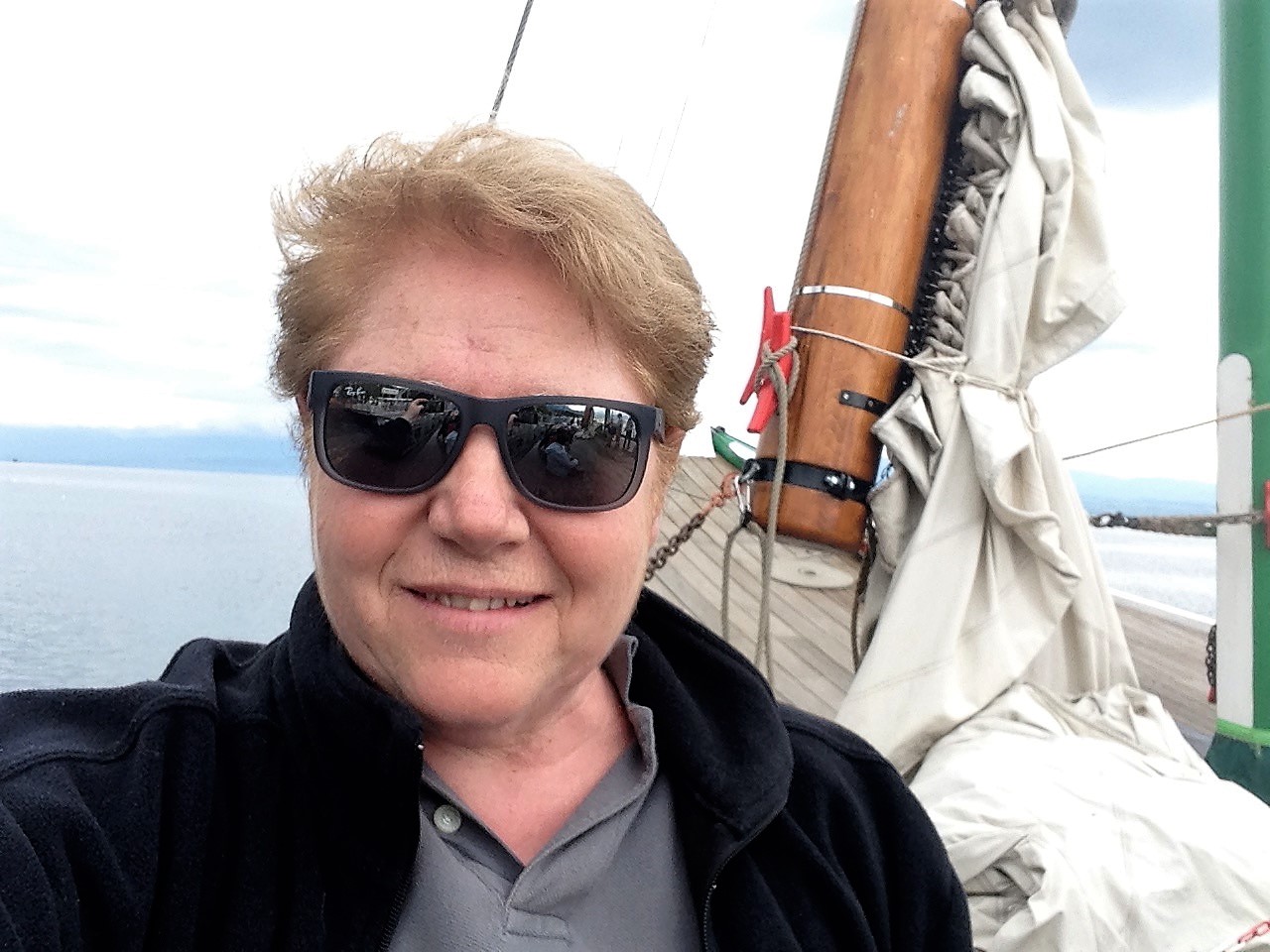 Leyla Giray Alyanak, the inspiring engine behind the Women on the Road travel blog, is a 64-year-old writer who used to work for the United Nations until 2 years ago. She retired from that job but now she works harder than ever continuing to travel and write about the world through her perspective. And what a perspective! Read on to discover a piece of Leyla’s world.

Who is Leyla and what does she dream of?

One of my biggest dreams is to go to every country in the world. I’m not 100% sure I’ll be able to do that but I will certainly try. I try to get to 3-4 new countries every year. I like jumping on the plane, going somewhere with no reservations other than for the first night. I like that at the age of 64 I still have the desire to discover a place without having any plans and with spontaneity. I also like the idea that due to my previous work in international development I have made a contribution, however tiny. I’d like to have enough money to start a charity for women from developing countries to help them travel more easily and see the world like those of us from richer countries. I hate that they have such difficulties obtaining a visa and everyone is suspicious about them. In the end, my dream is to see a little more compassion in the world and a little less selfishness. 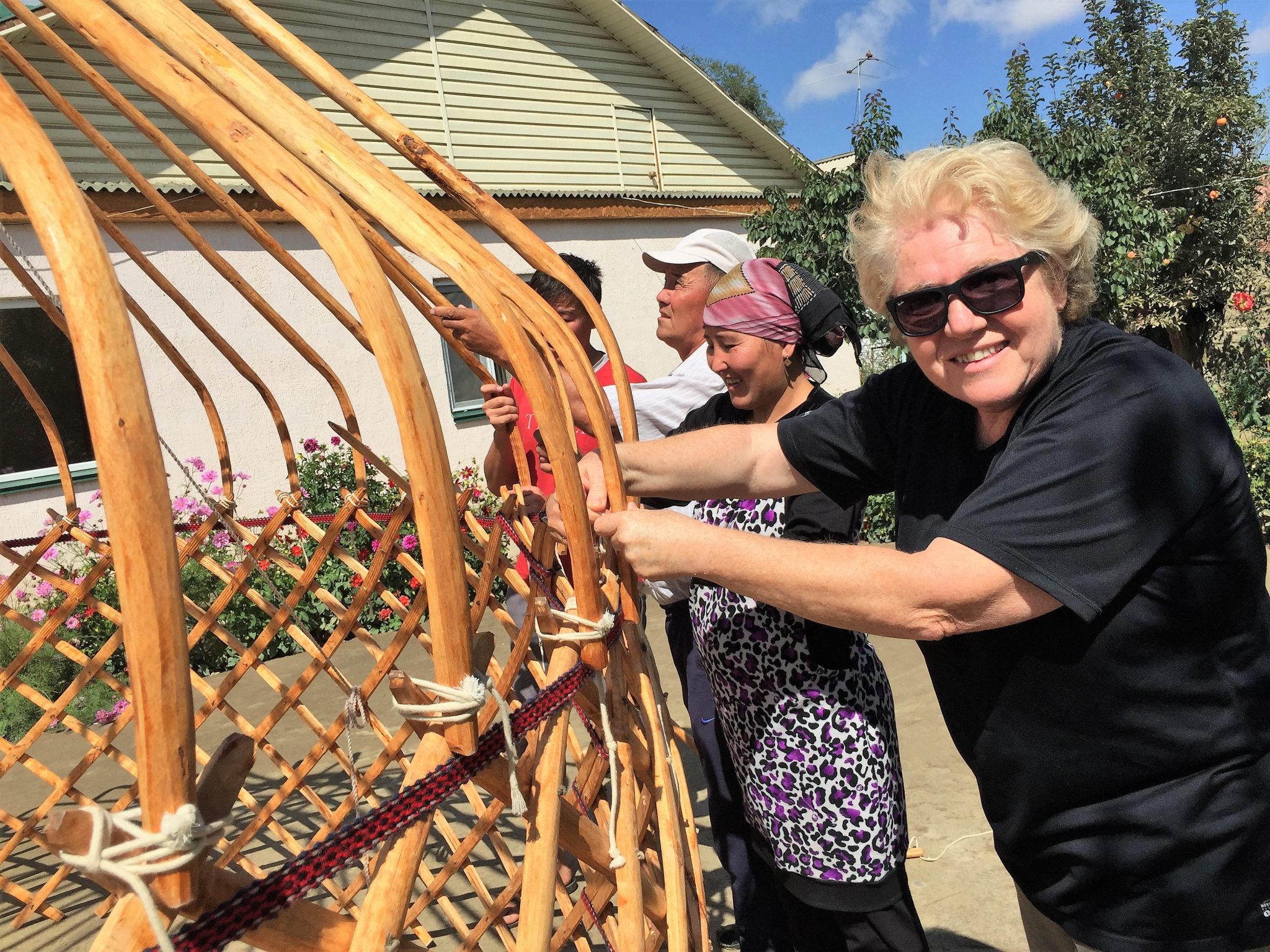 The pros of solo female traveling are… The pros are so many. The first is freedom – to be able to wake up in the morning and decide what to do without having to negotiate with anyone. Second, when you are all by yourself, you can’t throw the responsibility onto someone else. You make your own decisions and that’s a solid ego-booster, especially for women. You also meet more people when you travel solo. When you travel with someone, you eat together, visit places together and you don’t even try to meet other people, whereas when you are alone, you approach people and make friends more easily – and people can also approach you more easily. Solo travel also helps your world get bigger – because you have to open up more, you can’t just hide behind your partner or your group. This way of traveling has also made me more accepting. Just because I have to sort things out by myself, I’m more accepting of the world around me, I try to fight it less. Solo travel feeds my curiosity and makes me a more interesting person.

The cons of solo female traveling are… first, the loneliness. I’ve felt lonely, I’ve even cried that there was nobody there with me when the circumstances were particularly bad, like being locked out of my hotel room at midnight. It’s worst when you are sick – that’s when you want someone to bring you a chicken soup, to sit next to you and tell you “It’s going to be OK”. There’s also a security aspect – you sometimes might feel more secure, for example, if there’s another person around to take care of your gear. If you have ever tried to carry a huge backpack into a small squat toilet because you can’t leave it anywhere, then you know what I mean. You also have to be good at everything because you have to do everything by yourself – networking, talking to people, organizing, negotiating discounts… Finally, selfies. I want to take more selfies but I can’t because every time I try to take a photo with my selfie stick, I end up with only one eye in the picture. I don’t really feel like handing my phone to a stranger to take a photo and watch them run off with it. 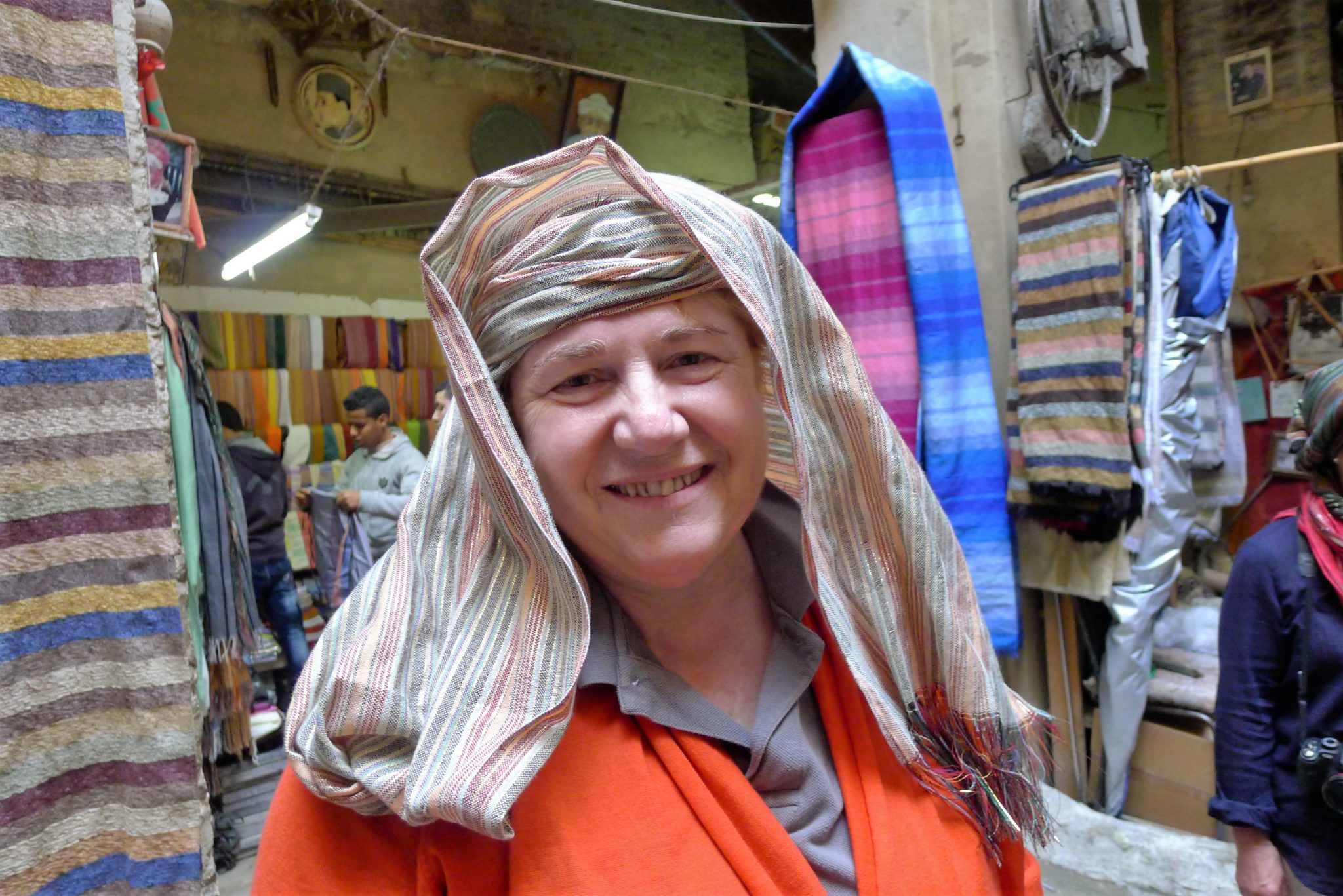 I never travel without… my flashlight. I always put it in my shoe when I go to bed. If there’s a fire, I’ll put my shoes on but I’d never think of taking my flashlight – and it can save my life. It’s also a little weapon!

Before setting off, I always… make sure that it’s the right day. I have a tendency to show at the airport a day early or a day late. If I travel over a 24-hour time zone, you can almost certainly guarantee that I will show up on the wrong day.

The first thing I do when I arrive at a new destination is… to hop on a bus. I just go till the end of the line and come back. And then I hop on another bus. Riding around the city on buses helps me understand how the city works and what kind of people live in it. If I stay a few days in a city, I can spend a day on buses.

The strangest thing that ever happened to me was… when I was stuck in a flood in the Philippines and I had to canoe my way out. That was wild because we actually had to build the canoe ourselves. Another time was getting lost in a minefield in Mozambique. It was terribly scary because we were lost and there were landmines all around us, I thought I was going to die. Another time, I was lost in the Amazon rainforest. I was with a group of Indians who thought I walked too slowly so they simply left me behind. Eventually I found two children in a tiny settlement. They didn’t speak any language that I spoke, they had never seen a car before and had no idea what I was trying to say. At that moment, I thought I was going to spend the rest of my life in this tiny two-house Amazon village. 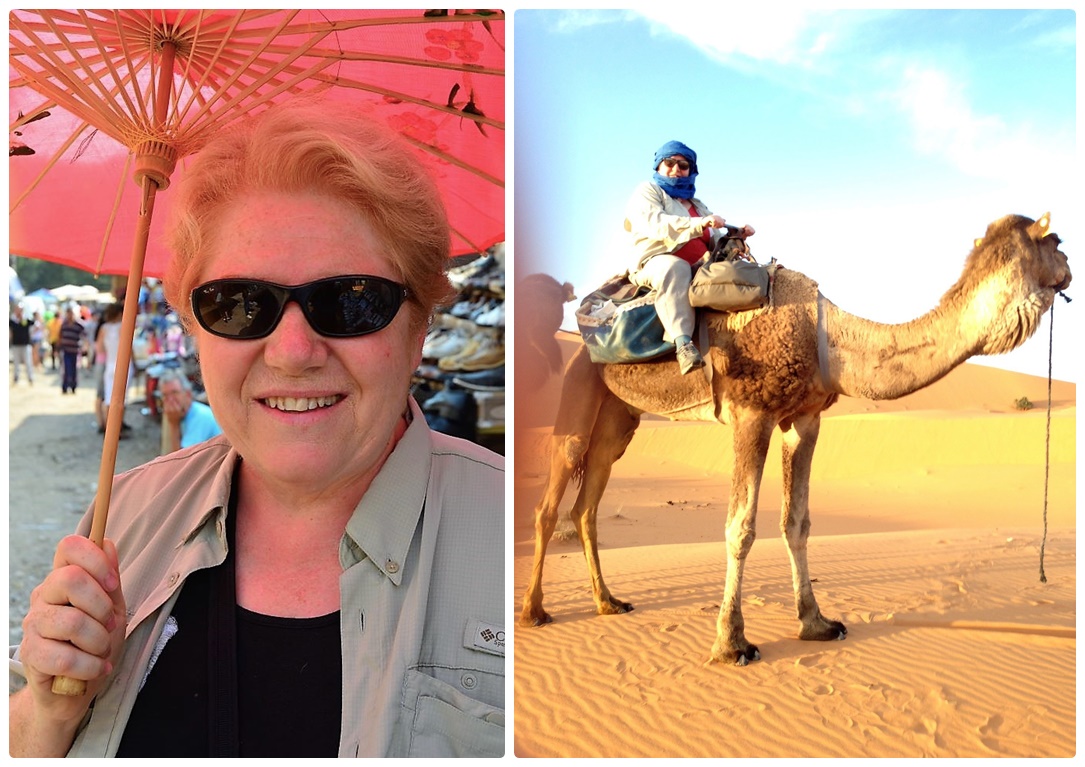 The trip that changed me… there were two. When I was 15 and living in Spain, I ran away from home. I went to the South of Spain, I hopped on a ferry to the city of Ceuta, which is a city in North Africa that belongs to Spain. I felt really grown up, sitting in the middle of the kasbah, sipping mint tea, until my father showed up to bring me back home. This trip changed me because it was the first time I realized I was happiest when I traveled. The other trip that really changed me was the one I took in my 40s, when I quit my job and took off to see the world for six months. I was gone for nearly four years, backpacking in Africa, Asia, and the Caribbean. When I came home, I was a completely different person, much stronger, much more comfortable in myself and clear about what I wanted in life.

The most helpful thing I’ve learned on the road… is that getting angry doesn’t get you anywhere. Just that.

The place that surprised me the most… I’m surprised by every place because I don’t have preconceived notions before I arrive. But I was recently surprised by Uzbekistan, which I had never visited before. The country has restored many of the buildings and monuments on the old Silk Road and it’s visually stunning. I didn’t want to leave.

The place I would come back again and again is… there are two such places: Spain and Thailand. I grew up in Spain and I lived for several years in Thailand, and both feel like home. Even if I don’t live there anymore, they are in a way my spiritual homes.

The most challenging trip… was the first year of my backpacking trip, the year up the spine of Africa. I started in Cape Town and I was headed to Cairo but I was stopped by the war in Sudan. It was challenging because the Internet was in its infancy, as was email, and I was out of touch for many weeks because I had to wait to find a long-distance telephone. I didn’t have a concrete plan of where I was going except that I was going north. Every day I would wake up and decide my route. I was on my own for a year and I loved this challenge.

If I have to share something inspiring with you, it would be… try to say ‘yes’! Would you like to come to a strange aboriginal barbecue? Your default answer might be ‘no’ because you don’t understand the question, you don’t know the people who are asking you. etc… By saying ‘yes’, you could have adventures you never dreamed of, and you’ll be pulled to places you would normally not go to. Of course, you still have to use your common sense. If the situation really feels unsafe, stay away from it.

One travel challenge for everyone reading this… get out of your comfort zone. Go somewhere you don’t understand the language or where you don’t know the food. If you are a city person, go for a nature hike. Push yourself and you’ll come back with a real sense of accomplishment.

Keukenhof: where to see 800 varieties of tulips in the Netherlands 0

What your vacation says about your personality 0

Traveling To Ireland? This Is Everything That You Need To Prepare 0