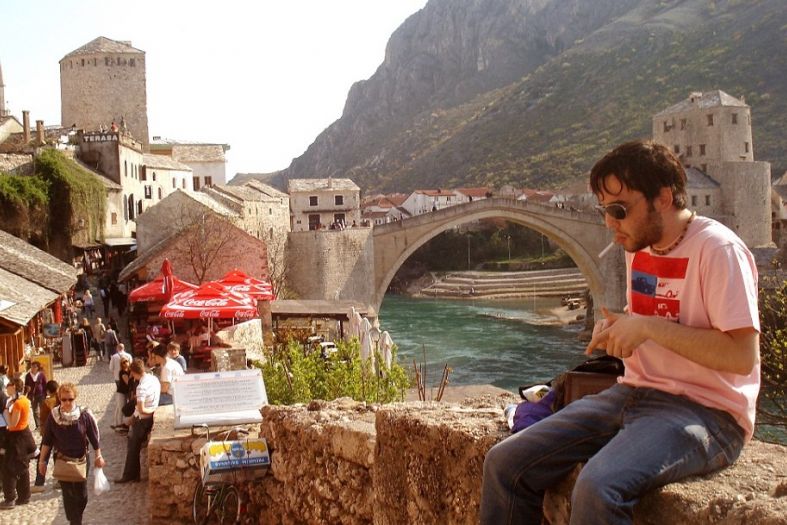 Kris Mole: How to travel Europe for free (an inspiring story)

203 Challenges 0 March 4, 2017 3:46 pm
When every tomorrow is a new destination
Inspiring travel authors: Jeffrey Ryan and the joy of hiking
How to plan a grand adventure – step by step

This is a story about a guy who travelled whole Europe for free. But no, this is not a story about hitchhiking and WWOOF-ing. Kris Mole found his own way to turn his dream into reality.

He wanted to visit every mainland capital city in the European Union. But that was not all. His Great Euro Freebie Challenge was inspired by yet another reason. In the process of completing the challenge Kris raised funds and awareness for Cancer Research UK through sponsorship. He dedicated the journey to his aunt Susan Proto who fought cancer at the time.

The trip started on November 1, 2007, and took 165 days of hitchhiking and travelling on trains (without a ticket, risking arrest).

Kris followed eight rules: no money will be spent, no credit cards, visit every EU capital on the physical continent, say yes to everything, accept every donation which isn’t cash, update his blog, begin the challenge in a foreign country and he was not allowed to let women compromise the challenge.

All the trip is described in Kris’s book “Gatecrashing Europe”. Here is what he shared about his crazy adventure.

My trip around Europe was inspired by… my Aunt Susan’s battle with cancer. And my fascination for all things European.

I wouldn’t do it again because… I’ve already done it now. And because it was the hardest thing I’ve ever had to do. I lost about ten kilos during the journey, and I wasn’t that big to begin with!

To travel for free is… strange at the beginning but after a short period you can’t believe there was once a time when you did pay for tickets. Since finishing the journey, though, I have gone back to paying for my travels.

The first thing I do when I arrive at a new destination is… go for a walk and get lost.

The most challenging about it was… the cold.

The most fun about it was… having no idea where I was going to be the next day. Or even in a few hours time.

I never travel without… pen and paper in my luggage.

The place I would come back again and again is… Sarajevo.

The strangest thing that happened to me on the road was… a Frenchman touching himself at the sight of me eating.

I never have time for… learning as much of the language of the place I’m in as I would like. That’s always my biggest regret. Wherever I am, I usually fall in love with the local language immediately and want to be able to speak it.

If I have to share something inspiring from the trip with you, it would be… There are so many. The overall one is just the overwhelming amount of kind people I met along the way, in every single country I passed through. But if I have to pick one specifically, then it is Max, a guy I met in Poland who was originally from Sierra Leone. He had escaped his country after literally staring down the barrel of a gun in his country’s civil war. He arrived in Europe with nothing and nobody. He worked and worked and worked, and now found himself working in a bar in Warsaw. He never stopped smiling. He had little money but insisted on buying me a meal in a Chinese restaurant. During the meal he told me his story. It was the most inspirational thing I’ve ever heard, and you can read about it in the book.

You can find Kris Mole’s Gatecrashing Europe in Amazon – paperback or e-book.

The Impact of Travel Literature on European Culture 0