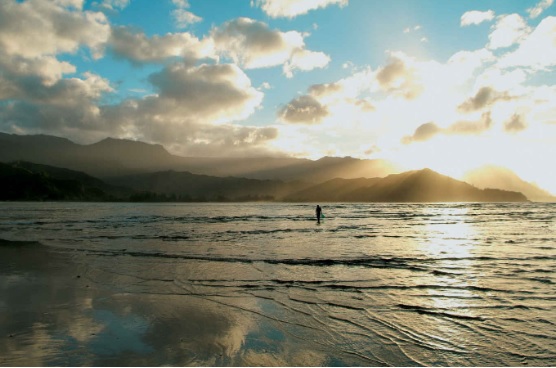 The Hawaiian Islands were born of fire thousands of feet below the surface in the icy cold waters on the Pacific Ocean floor. A rupture in the earth’s crust caused a vent to spew hot magma that built upon itself as it reached upward. When it began, no one knows exactly, but the first of the still-existing islands to boil to the surface was Kure. Nothing remains of that island today but its fringing coral reef called an atoll.

As the Pacific plate shifted over the opening of the vent like steel over a cutting torch, more islands were created. Midway, French Frigate Shoal, Necker, Nihoa—all of these once-great islands were born and then mostly consumed by the angry ocean. What we call Hawai’i is the last in a series of islands created by this vent. Someday these, too, will be nothing more than atolls, footnotes in the geologic history of the earth. But this vent isn’t finished yet. The Big Island of Hawai’i is still expanding as lava from its active volcano continues even now to create an additional real estate on that island. As we sit here, the future island of Lo’ihi is being created 20 miles southeast of the Big Island. Although still 3,100 feet below the surface of the ocean, in but a geologic moment, the Hawaiian volcano goddess Pele will add yet another piece of paradise to her impressive domain.

The virgin islands were barren at birth. The first life forms to appreciate these new islands of volcanic rock were marine creatures. Fish, mammals and microscopic animals discovered this new underwater haven and made homes for themselves. Coral polyps attached themselves to the lava rock, and succeeding generations built upon these creating what would become a coral reef.

Meanwhile, on land, seeds carried by the winds were struggling to colonize the rocky land, eking out a living and breaking down the lava rock. Storms brought the occasional bird, hopelessly blown off course. The lucky ones found the islands. The even luckier ones arrived with mates or had fertilized eggs when they got here. Other animals, stranded on a piece of floating debris, washed ashore against all odds and went on to colonize the islands. Тhese introductions of new species were rare events. It took an extraordinary set of circumstances for a new species to actually make it to the islands. Single specimens were destined to live out their lives in lonely solitude. On average, a new species was successfully deposited here only once every 20,000 years.

Each successive wave is like a sculptor’s hand, slowly shaping the island. Large storms can generate powerful waves, such as this one, which, over the eons, patiently return the island to the sea.

As the plants and animals lived out their lives, they broke up the rock, forming soil and organic debris. The ocean, meanwhile, was busily working to reclaim the horizon from these interruptions of land. Waves battered unmercifully against the fragile lava rock. In this battle between titans, there can be but one winner. While the creation of land eventually ceases on an individual island, the ocean never gives up. Wave after wave eventually takes its toll.

When in Barcelona, dine under the stars at Fabra Observatory 0