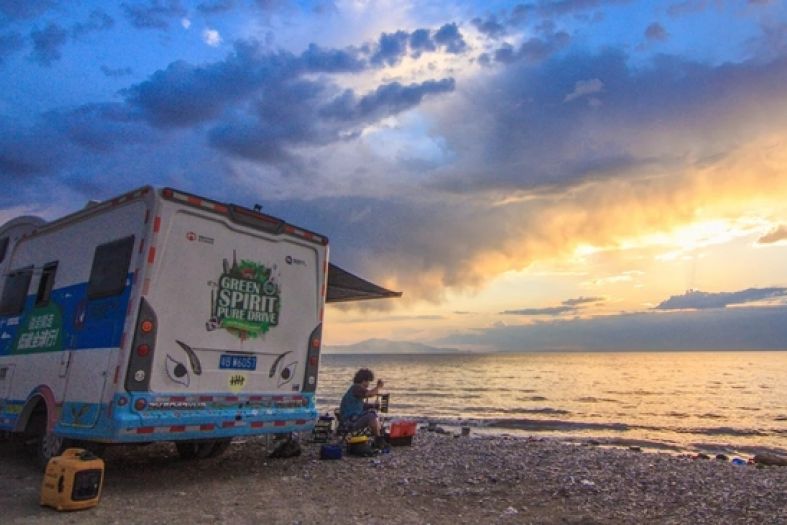 The journey that started with a Saturday talk

203 Challenges 0 March 4, 2017 7:03 pm
To cross Europe by kayak, join this epic challenge (even for a mile)
Mountain Biking Hot Spots in Scotland
8 meaningful travel experiences to enrich your life

One Saturday in the beginning of 2014 the Chinese Liu Jia and his girlfriend talk about what it would be like to travel a bit around China. Words and places running through their minds, they start dreaming about something more than a weekend in the countryside.

About a month after this talk both of them quit their jobs in Shanghai and together with two friends hit the road in their camper. During the 8-month journey they pass through 25 countries in Asia and Europe, travel more than 45 000 kilometers, 13 times have troubles with their vehicle, find 77 new friends, try couchsurfing and 31 times sleep in strangers homes.There is always something we want to do but still haven’t done. Why not start from the next second?

In Pakistan for more than 1,000 kilometers they were escorted by the police because of Taliban attacks threat. In Iran they discover the infinite hospitality of the locals and realize how different the country is from CNN and BBS broadcasts. From there they continue to Turkey, sail around the Greek islands, cross Albania, Kosovo, Montenegro, Bosnia and Herzegovina, Croatia, Hungary, Czech Republic, Austria, Germany, Switzerland, France, Belgium, the Netherlands, Poland, Lithuania, Latvia, then pass through the whole of Siberia right before the start of winter, only to go back to China through Mongolia.

“We saw with our own eyes – and wheels – that the continents of Europe and Asia are connected by land”- jokes Liu.

As for his adventure he says: “There is always something we want to do but still haven’t done. Why not start from the next second? Otherwise, the dream remains a dream for good”.

Watch the short video about their journey – an inspiration in its purest form (in Chinese with English subtitles).

A Saturday talk from Shome on Vimeo.

Loading...
Newer Post
The new bookstore in Bucharest you will fall in love with
Older Post
Kris Mole: How to travel Europe for free (an inspiring story)

Must see in Vietnam 0

Off the Beaten Path NYC and Brooklyn Vacation Activities 0