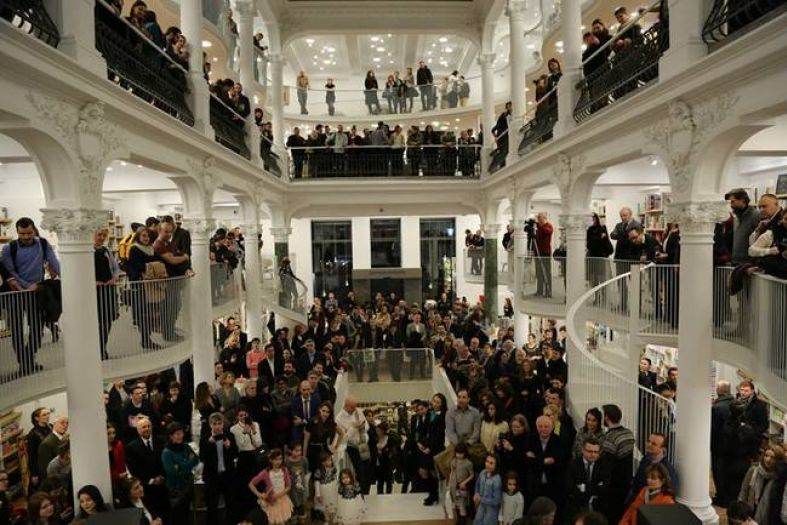 The new bookstore in Bucharest you will fall in love with

203 Challenges 0 March 5, 2017 12:21 am
6 places to visit in Romania
4 good reasons to (Re)visit Romania once traveling will be possible again
Salt mines to visit around the world

It s a bookstore, but it s not only about books. It s a real masterpiece – as if coming out of the books. It s a magical world of light, where diversity will make your head spin.

Carturesti Carusel (from Romanian “a Carousel of Light”) is the biggest and most attractive newly-opened bookstore in Romania. It is located in the heart of the capital Bucharest, in the old town in a beautiful 19th-century building called Chrissoveloni Palace. The bookstore was built there with the idea to combine old and new.

The building has rich history. Ever since it was built in 1860, it has always been an important commercial place – first it was a bank, then a bazaar and during socialism – a store.

The building had been property of the famous Romanian family of bankers Chrissoveloni, before it was nationalized during the communist period and turned into a store. The only living family heir – Jean Chrissoveloni, has been fighting in court for more than 20 years in order to regain ownership of the building. When he eventually won, he was given one condition – to restore the building and use it as he wished, but in a way it contributed to the economy development. And he had one wish only – the building to be used for culture.

After almost a million euro was spent on repair works and restoration of its classical glamour, the building was leased to the famous Romanian bookstore chain “Carturesti”, which turned it into an architectural work of art.The breathtaking all-white light-burst bookstore makes you forget about the noise of the city outside, makes you sit back comfortably in the soft pillows, scattered everywhere, and read peacefully.

Or just relax with a cup of tea or a glass of wine in your hand.

Or have a chat with friends. It doesn t matter if you are looking for a particular book, a gift, if you have some time to kill or you are going inside simply out of curiosity. The carousel will take you and lead you to the exact place you want, time will stop, the world around you will cease moving. The bookstore is big enough to host different social events, but also cosy enough for everyone to find their quiet secluded corner.

The bookstore has six floors. There is multimedia in the basement. The first floor hosts an art gallery. On the next three floors you can find items in all kinds of spheres, for any taste or age – more than 10 thousand books, 5 000 music albums, movies, gifts, toys, even clothes. The last floor completes the magic – the cafe/bistro/tearoom is there – according to your preferences. You have a rich choice of all kinds of coffee, tea and wine (which may literally make your head spin) as well as some delicious foods.

In short – Carturesti Carusel is the place where you can find all those little things, which make life truly wonderful.

Why does frequent flying cause weight gain? 0

Live abroad for a while – get more creative, richer and smarter 0

A beginner’s guide to the art of hitchhiking 0