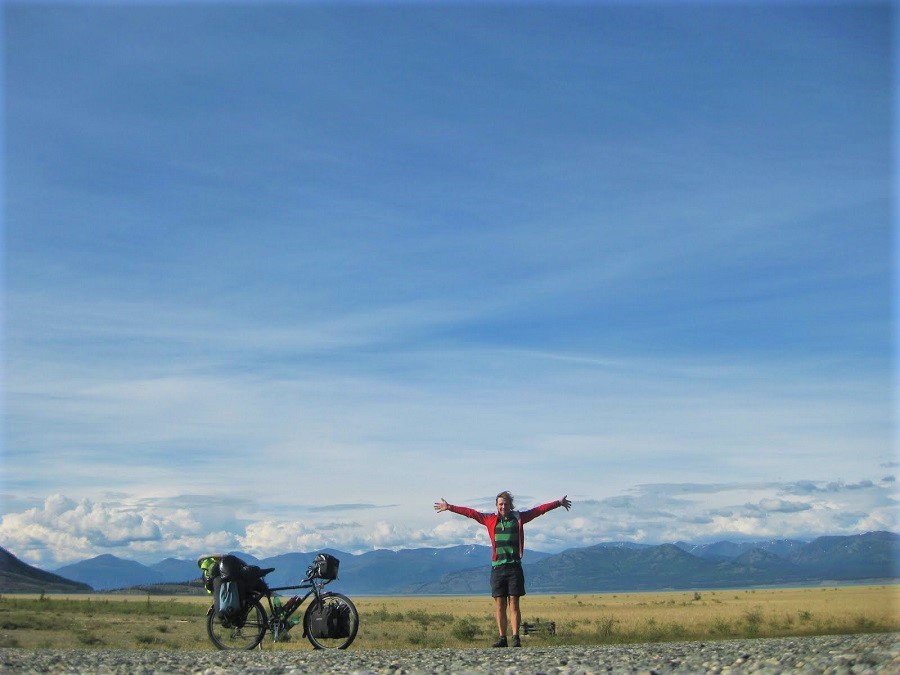 Cycling in the steppe of Mongolia – a book excerpt

203 Challenges 0 May 12, 2018 4:21 am
14 smells of Istanbul that always bring you back there
8 philosophies of a happy life from around the world
Food for thought with these 25 Japanese proverbs

Planning to cycle in the steppe of Mongolia? Read an excerpt from the book, “Terning: Around the World by Bike” by Sam Gambier where he tells the story of his solo journey through the Mongolian steppe. Don’t miss our interview with Sam Gambier.

Now, the dust of the city is gone. And the sheep for sale by the side of the road. And the goats tied to rusty pick-up trucks. So too the chimneys’ smoke, the crowded bus stops and the windowless breeze block walls. The cacophony of squealing brakes and lisping voices, of traffic whistles and loud abrasive horns, sounds only now as a memory; a vague recollection, no longer in my ears, but somewhere in the faded distance.

Above the dryness of the empty steppe, the heat of the air swells and grows humid. The light, spattering rain from the gathering clouds promises downpour, and soon enough I am trundling over the earth, away from the road, in search of a place to camp. Fat drops darken the ground and the sandy earth drinks, thirstily. I find a place to camp on a gentle slope. Far across the weeping valley, a cluster of Gers, white against the green, huddles against the rain, so distant that I see the horses gallop, before I hear the sound of hooves.

I wait in my tent for the rain to pass – the same green yellow walls; the spread of books, and clothes, and maps across the floor, the dried-out mud; the dampened smell of everywhere I’ve been all mixed to make the scent I know so well that now I barely notice it; as one’s own childhood home smells of nothing.

Only several hours later does the sun make its presence felt; light, warming rays shine bright through translucent walls. The new light is accompanied by a beautiful, mourning voice, singing outside my tent. Its tones ache gently through the walls, without sudden turns or staccato beats. It is simply an announcement; I am here.

As I open the zip the singing stops. Outside there is a boy my age; his horse waits patiently a few yards away. He wears a long deep yellow robe, tied with a red cloth sash around his waist. He walks slowly towards me and I invite him to sit down.

His name is Mungo, he tells me. He is a malchin, a herdsman. We sit around my phrasebook, pointing. He is married, has two brothers, and he lives with his parents, across the valley. I take out a packet of sweets I bought in Ulaanbaatar, and offer him one. We speak in gestures and smiles, little else, and he plays, fascinated, with various parts of my bike. He points inside the tent, asking for permission to have a look. He moves the zip, tentatively up and down. Has he seen a zip before? His eyes are like mine when I saw the camels. We sit a while longer, outside eating apples, and he leaves saying goodbye, and we both say thank you.

Later, I am making coffee on my stove, the percolator bubbling and hissing out steam, when a sound startles me. I look up to see a horse galloping towards me, full pelt, heading straight for my tent. At the last moment, the horse rears up on its hind legs and shudders to a halt. Another malchin jumps down from the saddle. He is older, fatter, but smiles as he takes my hand and shakes it firmly with apparent friendliness. Again, I share fruit and chocolate; I offer him a cigarette and he takes one, holding it out for me to light. I pour the bitter black coffee into two cups and watch as he winces at its taste.

Again, we flick through the phrasebook. I point at the words as my pronunciation renders meaningless everything I say. He tells me that he lives alone and, pointing to the clouds, still dark in the sky, he invites me to spend the night in his Ger. I am excited, curious to look inside these homes like no other I have seen, and I hurry to say yes.

He asks me for some money to buy airag, fermented mare’s milk, and I root around in my pocket for spare notes. I give him 5000 tögrög, about £1.50, and he smiles and puts his thumbs up. It is agreed.

It is only as he begins to rip tent pegs from the ground that I notice he is drunk. I call for him to stop and collect the pegs that he has thrown across the floor. It is time, perhaps, to be on my guard, but not yet cause for panic. He sits, smoking a cigarette, and watches as I lift my panniers out, set them on the ground, roll the tent into its bag, and begin to load the bike. We are almost ready.

It is now that he changes. He pushes my bike to the ground and kicks my helmet, motioning to hit me. His eyes have grown hard and violent and he grinds his teeth, swinging his fists and I jump out of his way. For a moment I stand, perplexed at this change of behaviour. In an instant he has turned and we stand, staring at each other in silence. Then he smiles, steps over the bike and comes towards me slowly. I am ready to duck. To run. I am not ready to fight. But he hugs me, tightly, drunkenly, and I feel the wetness of his lips upon my cheek. I smile at him, and return to pick up my bike, resolved to leave. Again, he pushes it to the floor, and grinds his teeth.

I duck down to pick up my helmet and put it on. When I look up he has taken out his horse whip, and it comes crashing down over my head, with a snap.

It is time to leave. To do anything to leave. I pick up my bike and push it against him as he tries to force it to the ground, and now I stare at him with anger.

“Go home,” I say in English. I spit out the words. I am scared. Again, he swings his fists. He pushes the bike over, but immediately repents, and smiling, with his thumbs up, comes to hug me. This time I back away. It is like watching a man hovering between two worlds, each one of them insane.

Again, I watch him clamber onto his horse. It takes him four drunken attempts, but eventually he manages it, and I watch with great relief as he trots away, towards his Ger, with my 5000 tögrög in his pocket.

He has covered just a few metres when he turns and, again, gallops towards me. He lashes wildly with the whip as I dive out of his path. He no longer seems drunk, but masterful and confident in his skills as a horseman and he spins around, swinging again for my scrambling body. Perhaps half a minute of this pantomime ensues before his former character resurfaces. Smiling again, he motions toward his Ger and indicates through gesture that I am welcome as his guest.

He stays there, stuck fast on the saddle, staring. I load the panniers onto my bike and cycle away, as fast as I can.

He is not following me. I am almost certain. But for the next 15 miles I check, glancing behind at every sound, at every panicked thought. I am surging with adrenaline, my heart beats, pounding into my chest and I feel it in my throat. When I eventually find somewhere to sleep, far from the road, I am intoxicated with fear. I bury myself in the grass and look down again at the road, in search of my pursuer, but the road is empty, and I try to imagine him, safely in his Ger, at the bottom of a bottle of airag.

I wake to find my legs stinging and red. In the rush to get away, or in the violent struggle over the bike, camping fuel spilt over my sleeping bag. Now my legs are covered in chemical burns; they will fester, and erupt in blisters the size of my fingers before I make it back to Ulaanbaatar.

Sam’s book is available on Amazon:

12 quotes about Japan that explain why people love it 0