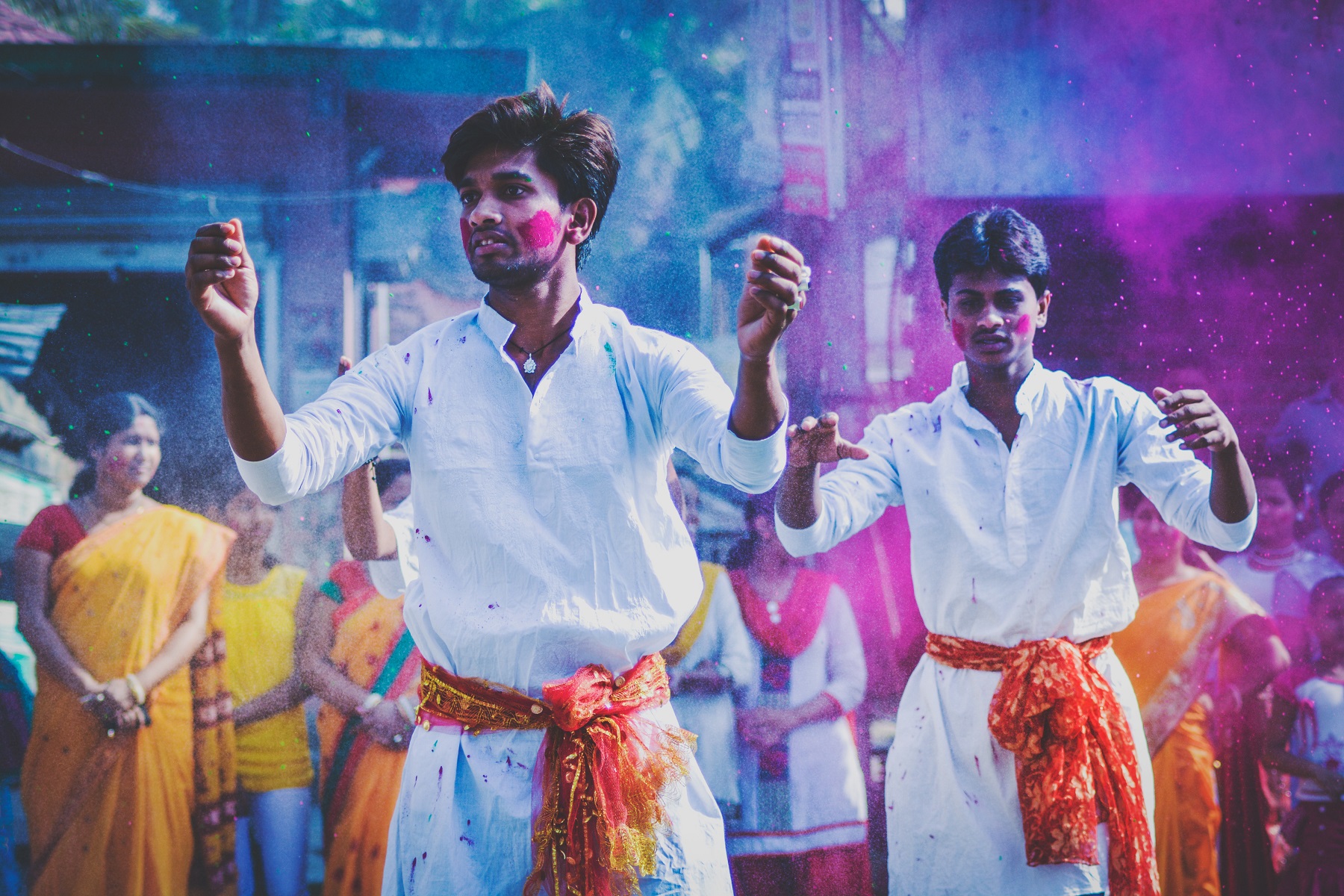 India has this peculiarity – it makes foreigners love it or hate it, but it’s impossible to keep it neutral. Immerse in the colorful insanity of the subcontinent with our collection of quotes about India:

1. Indians are the Italians of Asia and vice versa. Every man in both countries is a singer when he is happy, and every woman is a dancer when she walks to the shop at the corner. For them, food is the music inside the body and music is the food inside the heart. ‘Amore’ or ‘Pyar’ makes every man a poet, a princess of peasant girl if only for second eyes of man and woman meets. – Gregory David Roberts

2. India is a place where color is doubly bright. Pinks that scald your eyes, blues you could drown in. – Kiran Millwood Hargrave

3. Calcutta’s the only city I know where you are actively encouraged to stop strangers at random for a quick chat. – Tahir Shah

4. Time spent in India has an extraordinary effect on one. It acts as a barrier that makes the rest of the world seem unreal. – Tahir Shah 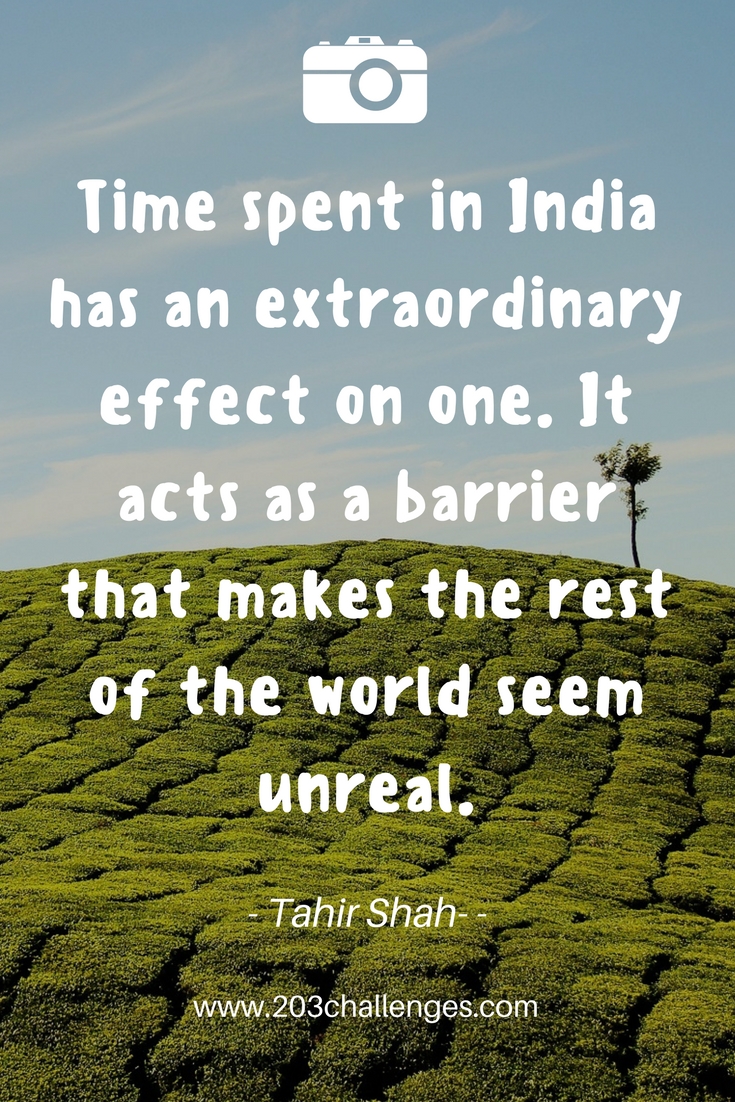 5. Where does one go in a tremendous city like Calcutta to find insider information? I recalled India’s golden rule: do the opposite of what would be normal anywhere else. – Tahir Shah

6. In some peculiar way, indeed, the rules were now beginning to seem quite logical. It was then I knew that I had been in India long enough. – Tahir Shah

7. If I were asked under what sky the human mind has most fully developed some of its choicest gifts, has most deeply pondered on the greatest problems of life, and has found solutions, I should point to India. – Max Muller

8. [India is] the One land that all men desire to see, and having seen once, by even a glimpse, would not give that glimpse for all the shows of all the rest of the globe combined. – Mark Twain

9. India has two million gods, and worships them all. In religion all other countries are paupers; India is the only millionaire. – Mark Twain

10. In India, I found a race of mortals living upon the Earth, but not adhering to it, inhabiting cities, but not being fixed to them, possessing everything, but possessed by nothing. – Apollonius Tyanaeus 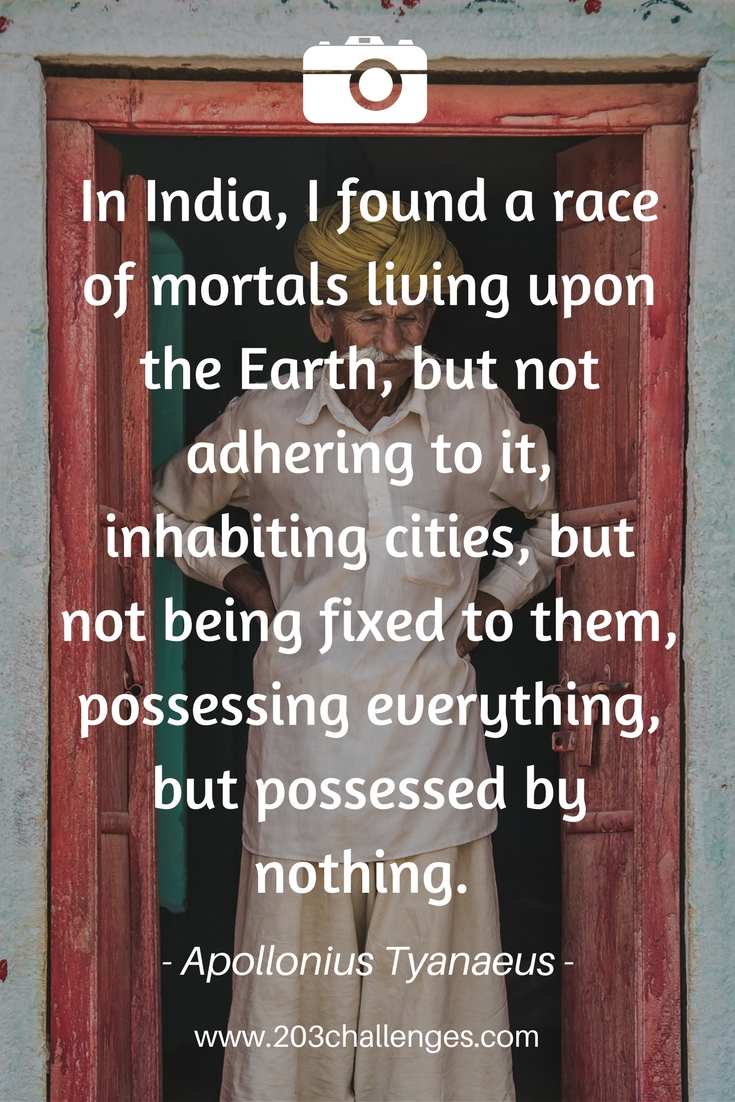 11. We owe a lot to the Indians, who taught us how to count, without which no worthwhile scientific discovery could have been made. – Albert Einstein

12. If there is one place on the face of earth where all the dreams of living men have found a home from the very earliest days when man began the dream of existence, it is India. – Romain Rolland

13. In India, you’re taught that there are certain qualities that make you a divine human being. – Deepak Chopra

14. The train system in India is chaotic and fun – it’s the best way to see the landscape. Being in with all the families and also being the odd animal is a colorful experience you’ll never forget. – Natalie Dormer

15. To me, India’s always represented ‘everything’; it represents ‘all.’ Everything is here. You can stay here forever, and you’ll never feel like you’ve missed out on life. – Chris Martin

16. Everything is recycled in India, even dreams. – Shashi Tharoor

17. In India even the most mundane inquiries have a habit of ending this way. There may be two answers, there may be five, a dozen or a hundred; the only thing that is certain is that all will be different. – Eric Newby 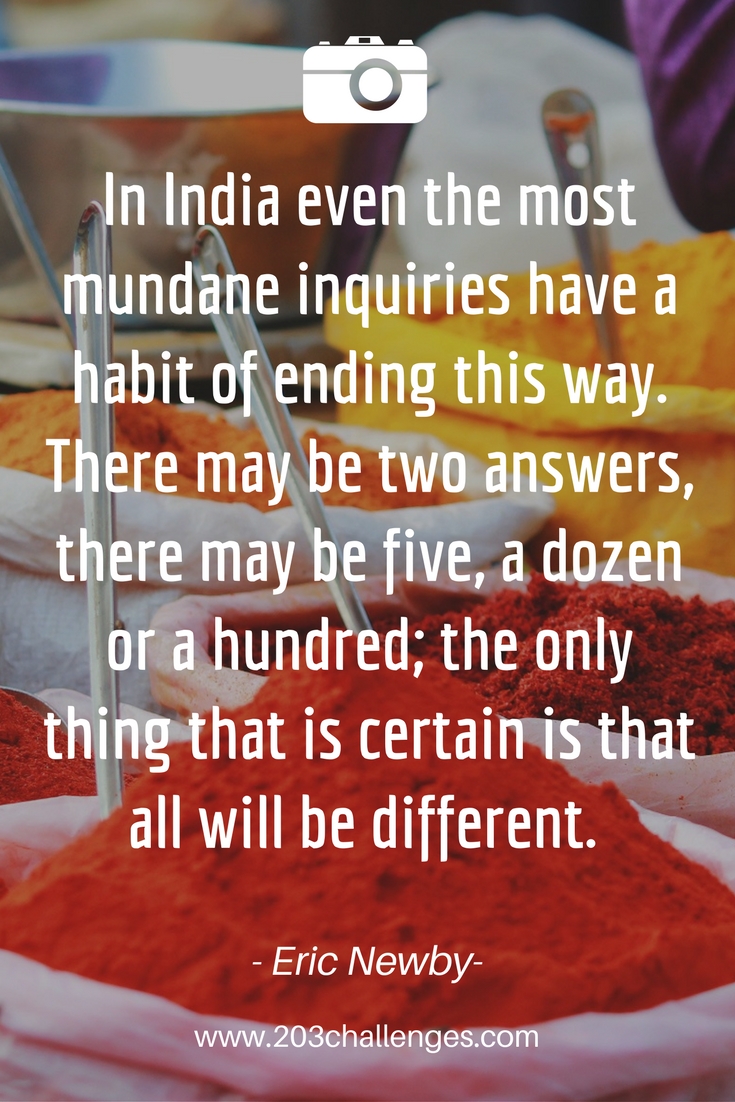 19. India will teach us the tolerance and gentleness of mature mind, understanding spirit and a unifying, pacifying love for all human beings. – Will Durant

20. Gravitation was known to the Hindus (Indians) before the birth of Newton. The system of blood circulation was discovered by them centuries before Harvey was heard of. – P. Johnstone

21. To other countries, I may go as a tourist, but to India, I come as a pilgrim. – Martin Luther King, Jr. 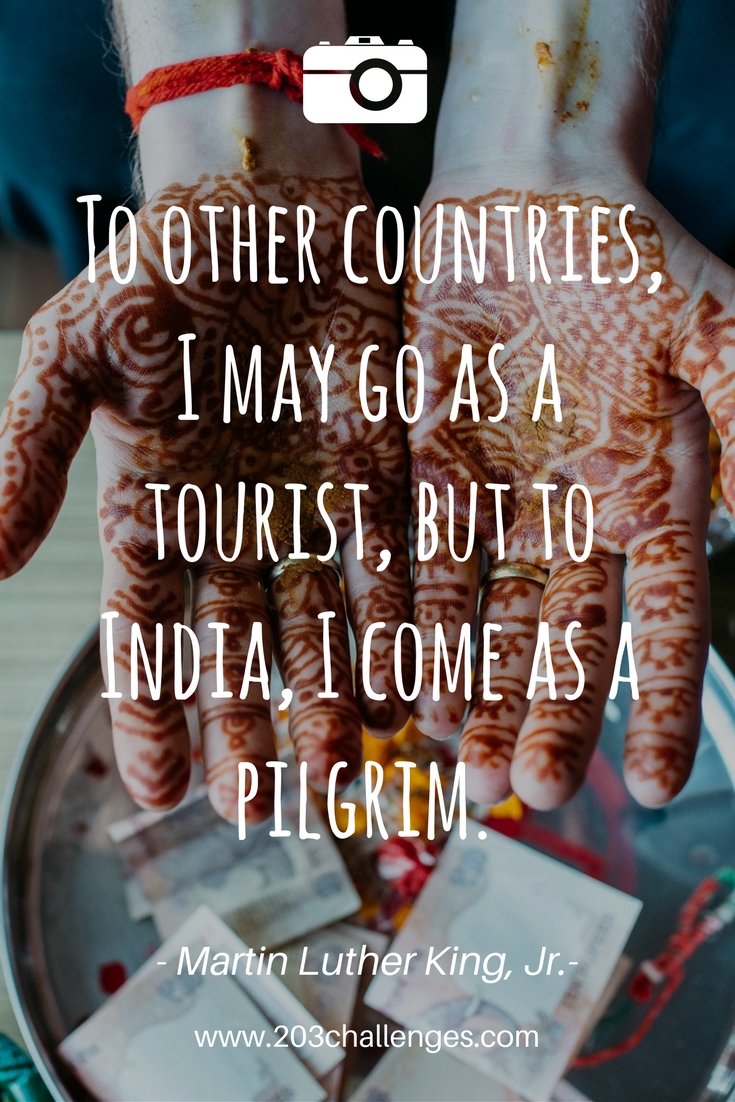 22. I like the evening in India, the one magic moment when the sun balances on the rim of the world, and the hush descends, and ten thousand civil servants drift homeward on a river of bicycles, brooding on the Lord Krishna and the cost of living. – James Cameron

23. More dreams are realized and extinguished in Bombay than any other place in India. – Gregory David Roberts

24. But nothing in India is identifiable, the mere asking of a question causes it to disappear or to merge in something else. – E. M. Forster

25. I noted that people are happy here in India. When I went back home, people had everything in the materialistic sense and were surrounded with abundance, but they were not happy. – Goldie Hawn 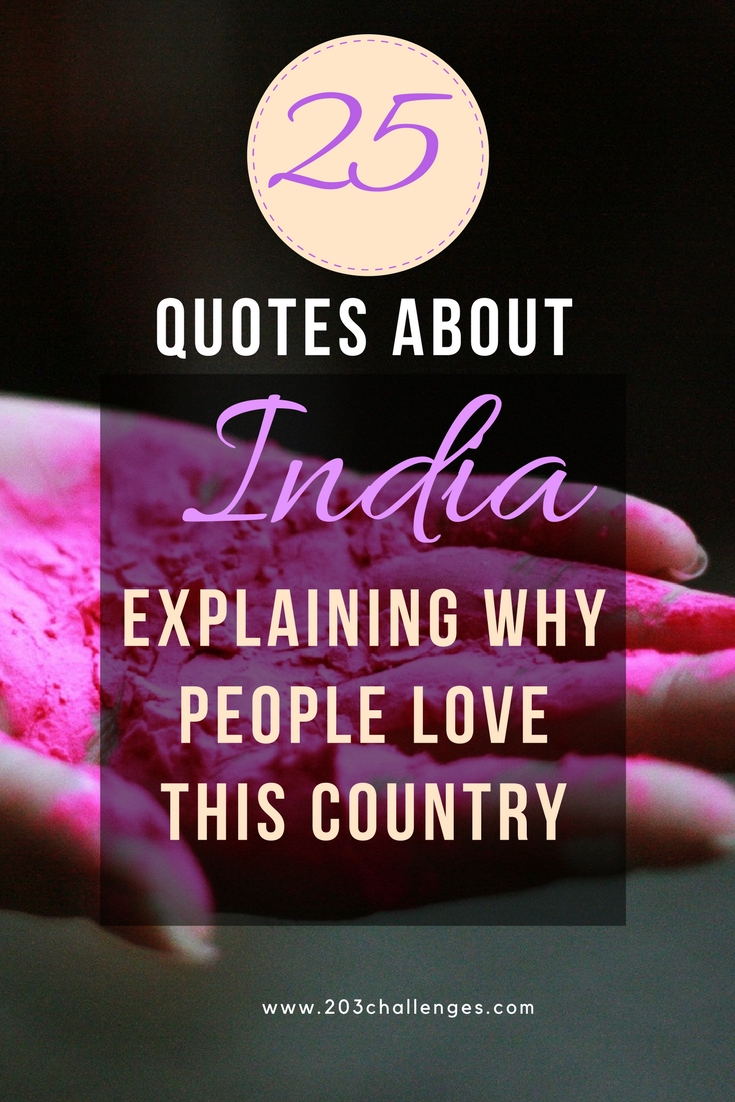 Loading...
Newer Post
The Last Supper in Milan: 7 best tips and secrets how to visit it
Older Post
5 quotes about Greece that explain why people love it

25 quotes about India explaining why people love this country 2

21 unusual Christmas travel ideas for every kind of traveler 2

Tuolumne bucket list: 12 unique and unusual things to do 0