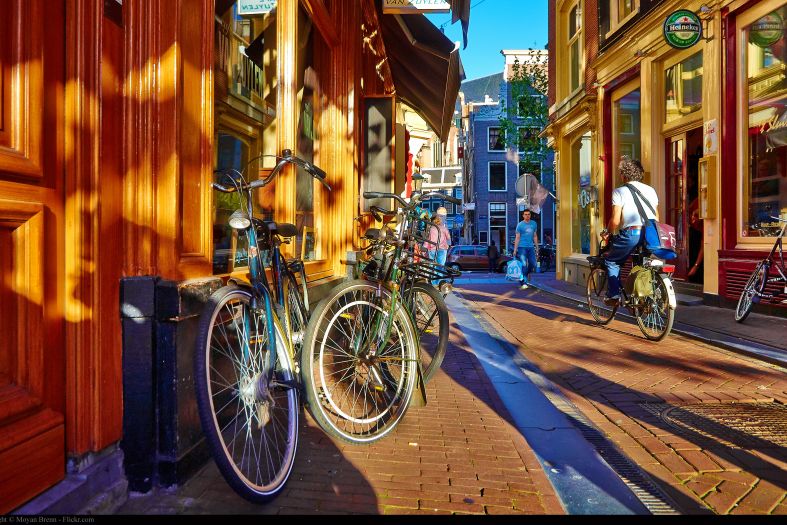 30 signs you have lived in the Netherlands far too long

203 Challenges 0 March 11, 2017 3:33 am
A beginner’s guide to cycling in the Netherlands
Giethoorn – the Dutch town without a single street
Travel playlists: 15 bicycle songs to hum while riding

1. When the sun peeks behind the clouds, you immediately stop doing whatever you are doing and go outside to have a brief moment of joy, just like a sunflower in July.

2. You have accepted chocolate sprinkles as a regular, healthy breakfast, as long as they are on a slice of bread.

3. You have used your bicycle to transport one or more of the following: a case of beer, a human, a mattress, your weekly groceries, another bicycle, a suitcase – and other large, uncomfortable objects.

4. You are no longer impressed by seeing a man in a suit, carrying a briefcase and riding his bicycle to work.

7. You have muttered “Tourists…”, while taking a walk or riding your bicycle in Amsterdam.

8. You are no longer impressed by any windmills.

9. You no longer look left and right upon crossing the road, since as a pedestrian you always have priority over drivers, even if you don’t want it. However, when crossing the bike lane, you carefully observe both sides a few times, so as to avoid being hit by a speeding mother, with three children on her bicycle.

10. You can eat French fries with mayonnaise, served in a paper cone, any time of day.

11. You no longer ponder over the contents of a frikandel before eating it.

12. To you, 15 degrees Celsius is a wonderful summer temperature and you don’t hesitate to break out the barbeque.

13. You’ve eaten raw herring without having lost a bet.

14. You no longer remember what hills and mountains look like.

15. You are not surprised by the sight of deer and/or sheep in city parks.

16. You are very well aware of the difference between the Netherlands and Holland and are very pleased whenever you have the opportunity to point them out.

17. You have acquired an almost instinctive behavior of sitting in a circle at every family gathering.

18. You have dinner at 6 PM and cannot remember why in the hell you used to eat later than that.

19. Your bicycle has been stolen at least once.

20. You have stolen a bicycle at least once.

21. You own at least one of the following: a pair of orange plastic glasses, an orange hat, an orange inflatable crown, or any other orange item, with the help of which you can demonstrate your Dutch pride during a football game, the King’s Day (previously the Queen’s Day) or any other important event.

22. The King’s Day is the biggest event of the year and you have planned your itinerary months ahead.

23. You know that the “correct” Christmas is celebrated on December 6, Santa Claus’s real name is Sinterklaas, he is of Turkish descent and arrives on a boat from Spain, not a reindeer sleigh from the North Pole.

24. Every holiday season you get dragged into the same argument: “Are Sinterklaas helpers, covered in soot, an example of racism, or are they not?”

25. You have grown to accept red trousers as a good and fashionable choice for men.

26. You know that most waiters do not expect a tip.

27. You know that you should never wear your best clothes and shoes to a party because they will certainly get tarnished by spilled beer.

28. You are no longer surprised upon passing someone on the street/public transportation and feeling the fresh smell of marijuana they leave behind.

29. You know that the moment it starts to snow, even if it’s not a lot, all the trains and trams will be delayed by at least 3 hours.

30. You no longer get scared when someone mentions that the entire country is below sea level.

The piece was created by Petar Angelov, a Bulgarian expat living in the Hague, Netherlands.