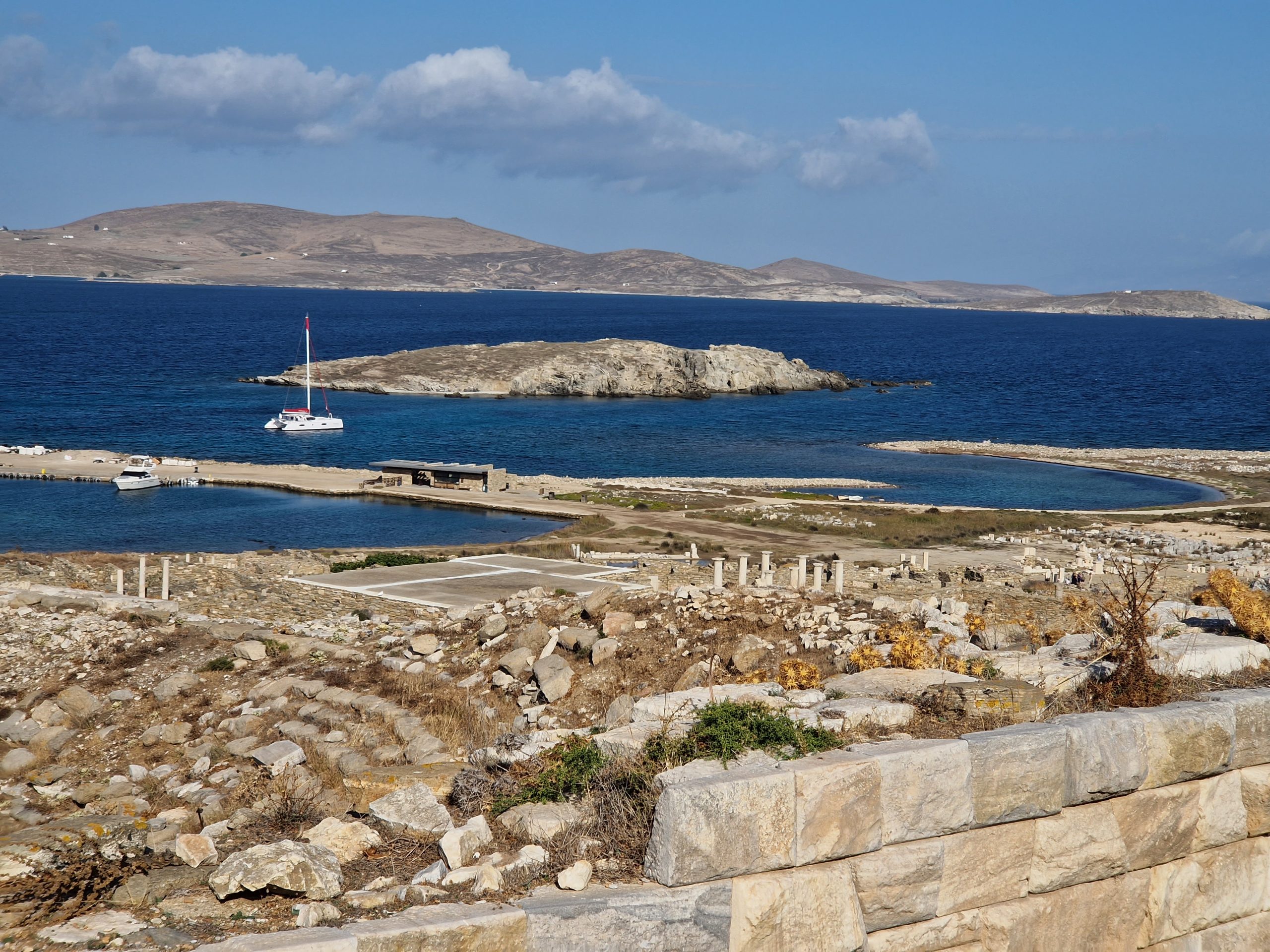 The Sacred Island of Delos near Mykonos

203 Challenges 0 October 4, 2022 10:44 am
Monte D’Accoddi: where in Italy you’ll feel like you’re in Mesopotamia
3 Things to Do in Mykonos
Kovachesko Kale Fortress in Bulgaria

Even though it is one of the smallest islands in the Aegean, Delos (just 6.85 km2) was the most famous and sacred of all islands in antiquity, since, according to the legend, it was there that Apollo-Helios, god of daylight, and Artemis-Selene, goddess of night light, were born – it was, in short, the birthplace of Light, which the Greeks always regarded as precious.

The earlier inhabitants of Delos built (ca 2.500 BC) their simple dwellings on the low hill Kynthos, from where they could easily inspect the sea for any approaching enemies. The Mycenaeans, who arrived later on (end of 15th cent. BC), felt confident enough to settle in the small valley by the sea.

The Apollonian sanctuary, established at least since the 9th cent. BC, reached the peak of its glory during the archaic (7th-6th cent. BC) and classical (5th-4th cent. BC) period, when Hellenes from all over the Greek world gathered there to worship Apollo, the god of light, harmony, and balance, and his twin sister Artemis, the moon-goddess.

Naxos, and later Paros, tried to exert their power by taking advantage of the glory of the Sanctuary. However, the city which ultimately prevailed was distant Athens, justifying her presence there with various myths. During the rule of either the tyrant of Athens Peisistratus or his sons (540-528 BC), the Poros Temple of Apollo was built and housed a larger-than-life statue of the god.

In 478 BC, after the end of the Persian Wars, the Delian League of Greek cities was formed in order to deal with future threats. The headquarters of the League was on Delos, where the enormous sums which had been contributed by the city-states were kept and where their representatives met. Very soon the Delian League evolved into an Athenian hegemony, and the allies became subjects of the Athenians. The funds from the common treasury were moved to the Acropolis of Athens in 454 BC, ostensibly for reasons of security; in reality, however, they were intended to finance Pericles’ ambitious building programme.

In 476 BC the construction of the second temple of Apollo, the Great Temple, or Delian Temple began. It was interrupted because the League’s funds had been moved to Athens. Building was resumed during the Period of Independence (314-166 BC), but the temple was never completed.

During the winter of 426/5 BC the Athenians decided the “purification” of Delos, supposedly for reasons of piety. They opened up all the graves on the island and moved the bones and funerary offerings to Rheneia, where everything was buried in a common pit. At the same time, they decided that no one would be allowed to be born or die on Delos; and that women close to delivery and the seriously ill should be transferred to Rheneia. From that time on, no one was born, no one died, and no one was buried on the holy island; and the inhabitants of Delos, as was the intention of the Athenians, were left without a homeland. In 422 BC the Athenians completed the “purification” by exiling all the local population.

Immediately after the purification, and despite the fact that they were still at war, the Athenians, without any remorse or fear, began the exceedingly costly task of constructing yet another temple to Apollo, this time of white Pentelic marble, and established the Delia, a festival in honour of Apollo.

After the death of Alexander the Great, the Aegean suffered almost forty years of upheaval due to the wars between the ambitious generals who succeeded him. Antigonos and his son, Demetrius Poliorcetes (the “Besieger”), established the ”Commonwealth of the Islands”, with Delos as its religious centre, whereupon Delos was declared free and independent (314-166 BC).

During the Period of Independence the rulers of the Hellenistic states vied with each other in constructing magnificent buildings on Delos. The entire site of the Sanctuary was decorated with hundreds of marble and bronze statues, and costly votive offerings from cities or wealthy individuals; unfortunately, only their inscribed pedestals remain.

The Commercial centre and the cosmopolitan City

The Period of Independence came to an end when the Macedonians were defeated by the Romans at Pydna in 168 BC. In 166 BC, the Romans granted Delos to the Athenians who once again exiled the Delians and installed their own settlers on the island. The Romans, who were thenceforth to regulate the fate of the Mediterranean, proclaimed Delos a free port aiming thus to precipitate the financial ruin of the rival Rhodians. The fact that Delos was exempted from tax (ateleia) by the Romans, as well as its exceptionally favourable geographical location and the destruction in 146 BC of Corinth, hitherto an important commercial centre, resulted in Delos becoming the hub of the transit trade between East and West, North and South. Powerful Rhodes was economically ruined, while Delos soon became the maximum emporium totius orbis terrarum (Festus), the greatest commercial centre in the world. On the noisy wharves, ships from all over the Mediterranean, were constantly loading and unloading tons of merchandise and thousands of slaves.

An inevitable consequence of the island’s growing wealth was the sharp increase in population and intense construction activity. Within a few decades a City spread over the slopes of the six low hills surrounding the valley of the Sanctuary. The result of this rapid growth was a haphazardly built city without formal city planning or a regular street layout. This is especially evident in the Theatre Quarter, the oldest and the wealthiest quarter of the city.

Compared to other commercial cities of that period, the existence of the ancient Sanctuary and the myths surrounding it, made Delos a noteworthy city.

The wealth which had been accumulated on the island and the Delians’ friendly relations with Rome were the main causes of the island’s destruction. The island was devastated and looted twice: in 88 BC by Mithridates King of Pontos, who was at war with the Romans, and again in 69 BC by the pirates of Athenodoros, an ally of Mithridates.

After Delos had been destroyed for the second time, the population gradually dwindled, and the island was eventually abandoned and forgotten. Tertullian, apologist of Christianity, cited the later Sibyllic oracle in a characteristically spiteful way: “Even Samos shall be sand, the Far-Seen [Delos] unseen”.

In the early centuries AD, there was even a considerable Christian community on the island, as testified by the remains of eight early Christian basilicas and the fact that Delos is mentioned as being the seat of a bishop. After the 7th cent. AD, however, it appears to have been totally deserted and the uninhabited islet became a pirates’ lair for many centuries.

The excavations, which started in 1872 and are still in progress, have unearthed the Sanctuary and a good part of the cosmopolitan Hellenistic town.The findings from the excavations are housed in the Delos Museum, and include all or part of some 30,000 vessels, statuettes, small objects, 8,000 sculptures, and 3,000 inscriptions. Most of the sculptures, a few pottery and small objects are exhibited in the Museum’s eleven halls.

Since 1990 the whole island of Delos has been designated a World Cultural Property and is protected by UNESCO. Extensive conservation and restoration work has been done the recent years financed by the EEC and the Hellenic Republic.

7 unique and free things to do in Berlin 0

Zagreb – attractions to visit in a weekend 0