Experience the Hai Van Pass in Vietnam by scooter

Upon leaving the UK, our parents were relatively relaxed, or as relaxed as ones parents can be as they wave their offspring off on a year-long adventure around the world, going through countries which have travel warnings and others which require a host of different inoculations and travel insurance to even enter. One of their small requests was that we avoided motorbikes/scooters on our adventures, having never ridden in the UK, they were only too aware of the injuries that can be sustained with fully trained, cautious riders, let alone underprepared, undertrained, riders in countries which have very different rules on the road. We were happy to agree; there are plenty of other ways to travel around without jumping on a motorbike/scooter.

In India we watched lots of our friends grabbing bikes in Goa to visit tricky to get to beaches and to go to remote party locations. We also saw some of them come back with (thankfully) minor injuries after crashing their bikes, followed by forgoing their deposits leaving a financial dent for the rest of the trip. Once we knew they were okay, we had a slight sense of smugness knowing that we had avoided temptation and been sensible. You only live once: either this means to live every day like it is your last and enjoy it, or try and avoid every day being your last by not partaking in activities which are too reckless!

Fast forward to Vietnam, one of the party capitals of South East Asia, where you don’t have to plan your journey, instead you just go where the party takes you, or at least that was what we were told. This is advice which holds up for just about the entire year. Unless you are travelling during the Lunar New Year, or Tet as it is called in Vietnam. If you are travelling within Tet you need to organise, otherwise, you can end up stranded in a small town, with no accommodation, no food, and most importantly to a number of backpackers: no alcohol or parties. We realised at the 11th hour that we were hoping to just let our free will guide us over Tet and were heading for disaster, so we quickly started locking down accommodation and travel which meant we’d be able to see Vietnam and not just be stuck in Hanoi for a couple of weeks. Part of these plans meant working out how to travel between Hue and Hoi An. We were keen to get to Hoi An for Tet as it is a big, beautiful, city which we knew would have enough activities (and generally places open) to sustain us through Tet. The buses (to which we already had an open bus ticket for) were fully booked, so we opted to pay extra to do an open top jeep excursion over the Hai Van Pass which famously connects Hue to Hoi An, with its hairpin bends, sheer drops, and, providing you survive, breathtaking views. The travel rep at the hostel we were staying at busily booked in our various hostels, buses and activities and we breathed a sigh of relief that we wouldn’t struggle over Tet. The last thing he booked or attempted to book, was the open top jeep tour – whilst he talked on the phone we saw his face change from a big smile to a look of shock and horror. Of course, it turns out the open top jeep tour was no longer available – the only option left was to do the journey ourselves on a scooter/motorbike.

In a moment of madness, we agreed, we had heard enough of the horror stories of being stuck in a small town like Hue over Tet, and desperately wanted, or perhaps needed, to get to Hoi An. We hoped we’d receive some half decent motorbike training, how to ride, how to handle emergency situations, a few hours of tutored riding with an expert. What we got was a set of keys with a registration number on, and a wave of good luck. Never did we expect to be learning how to ride a scooter, for the first time, on the crazy roads of Vietnam, with no guidance of tuition. Two friends showed us how to start the bike, and make it go forwards and backwards, beyond that it was down to us to wobble up and down the road outside the hostel a couple of times, before attempting a couple of laps around the block. With this amount of training, we were ready to take on the 160KM journey between Hue and Hoi An.

We hadn’t bargained for how much riding we’d have to do to get to and from the Hai Van Pass, through the middle of city centres where there are simply no rules, bikes go on whichever side of the road they fancy, they go on the pavements, some traffic lights seem to be vaguely obeyed whereas a lot are just completely ignored. At a roundabout, 90% of the traffic will go around counter-clockwise, and the remaining 10% just go round the other way, no one indicates, and instead everyone plays a sort of game of chicken, where you just have to look at the other motorists and try to negotiate how you’ll avoid colliding with each other. To say it was an experience would be an understatement. Yet there we were, barely able to start and stop without wobbling over, tackling the scenario as best as we could. 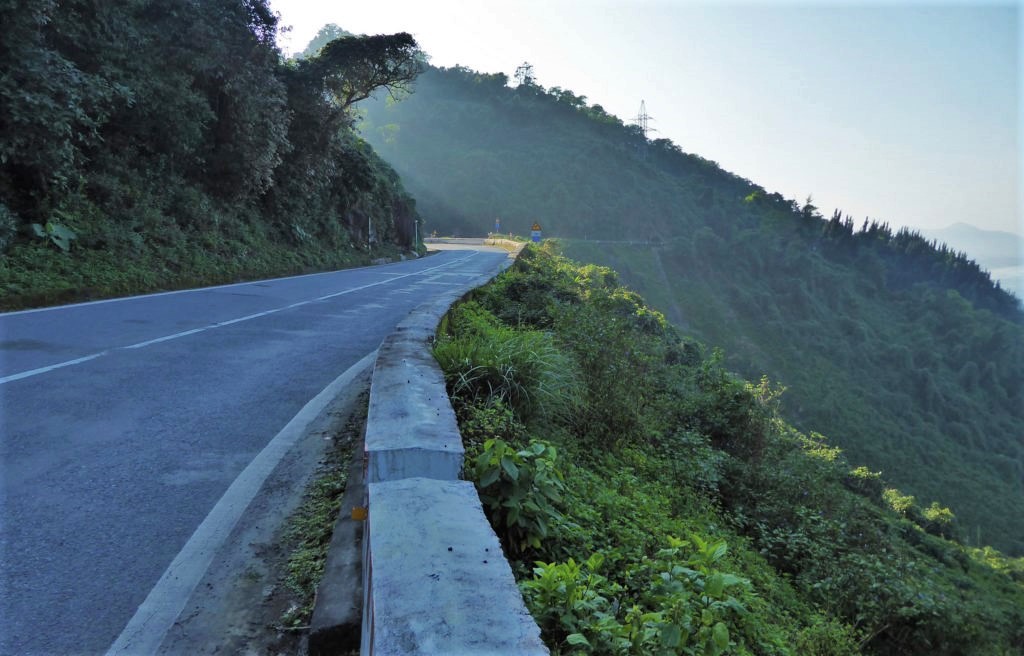 Did we make it? Thanks to survivors bias, yes we did. Not only did we make it, but we were awestruck by the views from the Hai Van Pass, but not just that, but also by the off the beaten track places we could visit on the way, including Elephant Springs and the coast of Lang Co Bay. The experience was scary yet exhilarating, irrational yet sensational. We didn’t check our insurance documents before starting, not due to carelessness, but due to not wanting to find out we weren’t covered to add even more pressure. We arrived about four hours later than the experienced riders, but we arrived in one piece, with nothing but numb bottoms and hands.

We were forced into this journey due to lack of other options, but for someone who is more competent on a motorbike/scooter it is definitely a journey worth doing and is somewhat famous after being featured on the hugely popular TV Show, Top Gear. Top tips would be to start early, take lots of sun cream and keep covered up, any skin left uncovered will be red and burnt unless you are used to be under the beating sun all day long.

Steven and Gemma quit their full-time jobs, packed up their house, cancelled all their bills, declared their car off the road, rented out their house, and set off on a year adventure to travel around the world, exploring no less than 18 countries, including: India, Russia, China, Japan, SE Asia, Australia, New Zealand, Fiji, Hawaii, North and South America. They started a travel blog called Our Big Planet. They are currently 10 weeks into their adventure but their dream is to be able to travel full time.

5 Poetry That Will Inspire You to Travel 0