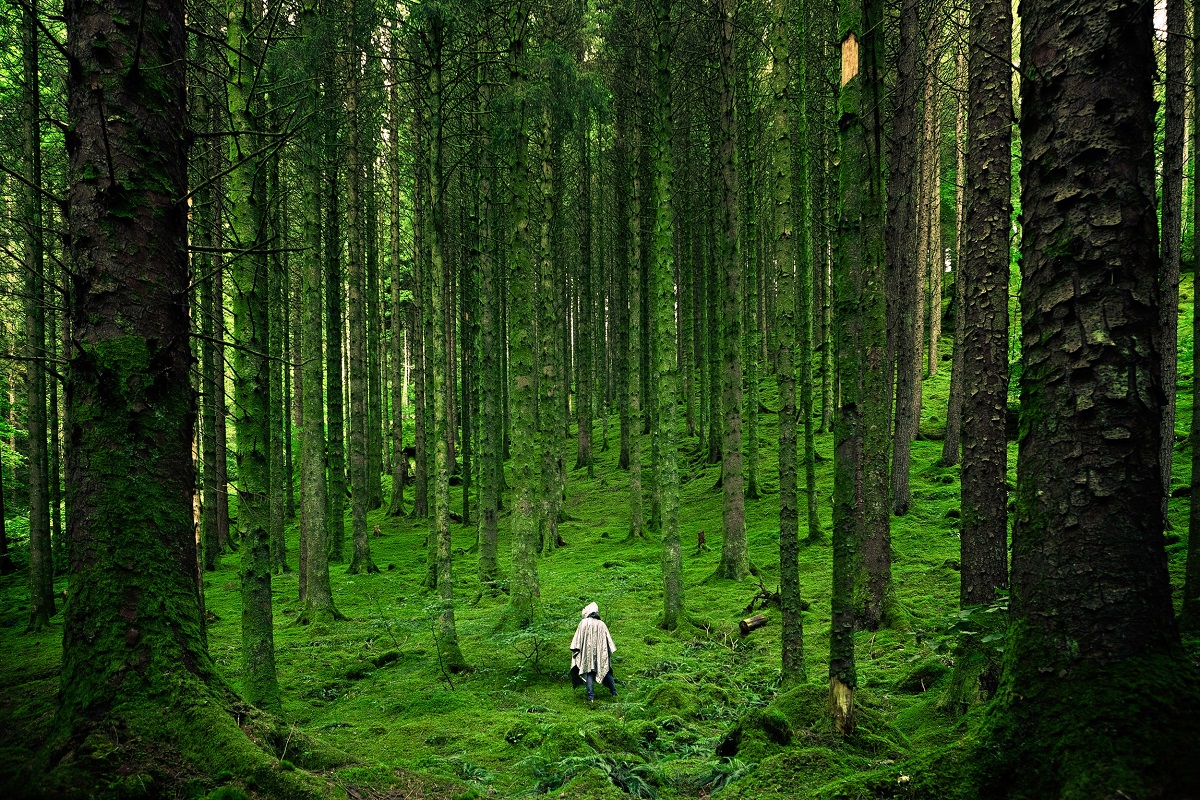 …because if you can laugh at a crisis, you’re saved!

I feel like my whole travel story is filtered in Terry Pratchett’s Big Bang theory:

“In the beginning there was nothing, which exploded”.

His tongue-in-cheek wisdom has helped me see the world’s bright side, no matter where in this world I’ve been. Here’s a collection of 29 of my favorite Terry Pratchett’s quotes regarding various travel situations:

Tips to remember on your first trip…

“Wisdom comes from experience. Experience is often a result of lack of wisdom.”

“We’ve got a lot of experience of not having any experience.”

“Always be wary of any helpful item that weighs less than its operating manual.”

“Why do you go away? So that you can come back. So that you can see the place you came from with new eyes and extra colors. And the people there see you differently, too. Coming back to where you started is not the same as never leaving.”

“My experience in Amsterdam is that cyclists ride where the hell they like and aim in a state of rage at all pedestrians while ringing their bell loudly, the concept of avoiding people being foreign to them. My dream holiday would be a) a ticket to Amsterdam b) immunity from prosecution and c) a baseball bat.”

“Studies have shown that an ant can carry one hundred times its own weight, but there is no known limit to the lifting power of the average tiny eighty-year-old Spanish peasant grandmother.”

When something goes wrong, remind yourself that…

“Freedom without limits is just a word.”

“There isn’t a way things should be. There’s just what happens, and what we do.” 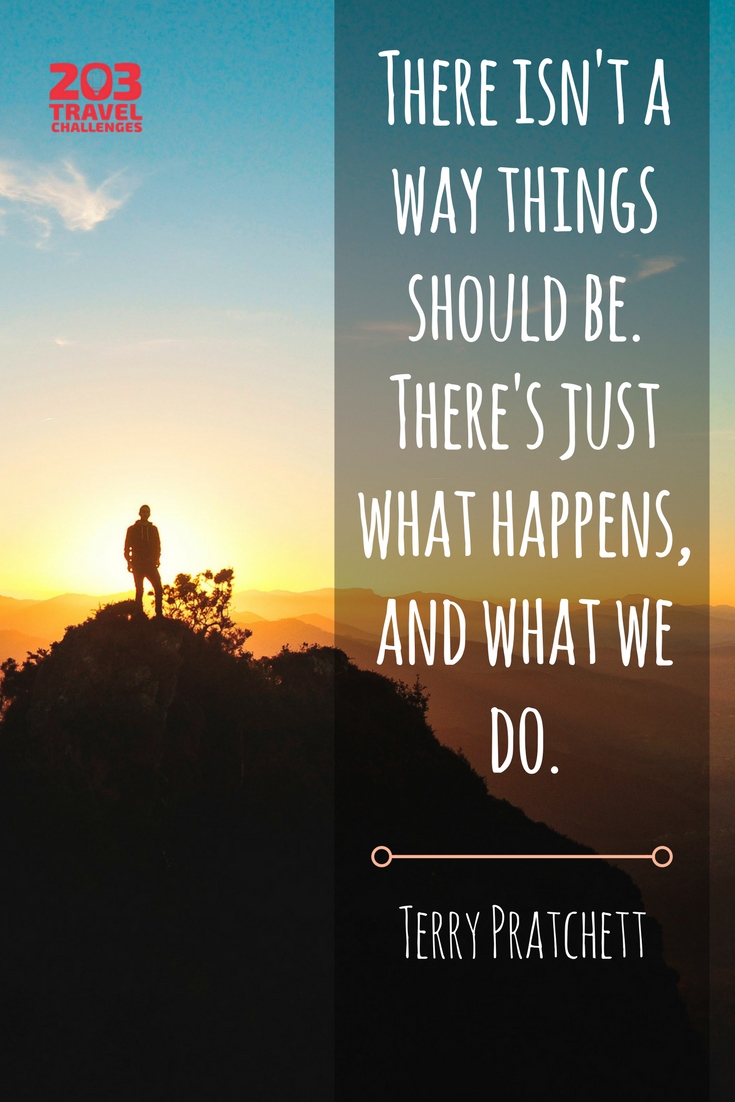 “It’s not worth doing something unless someone, somewhere, would much rather you weren’t doing it.”

“Do you think it’s possible for an entire nation to be insane?”

“Inside every sane person there’s a madman struggling to get out.”

“So, everything in this world ran its natural course. Except for everything else that went heels over head.”

“Sometimes you laugh because you’ve got no more room for crying.”

“Lots of people would be as cowardly as me if they were brave enough.”

When you get lost…

“She was also, by the standards of other people, lost. She would not see it like that. She knew where she was, it was just that everywhere else didn’t.”

While you watch the sunrise…

“The sun rose slowly, as if it wasn’t sure it was worth all the effort.”

When you had it coming…

“He was the sort of person who stood on mountaintops during thunderstorms in wet copper armour shouting ‘All the Gods are bastards.”

“Human beings make life so interesting. Do you know, that in a universe so full of wonders, they have managed to invent boredom.” 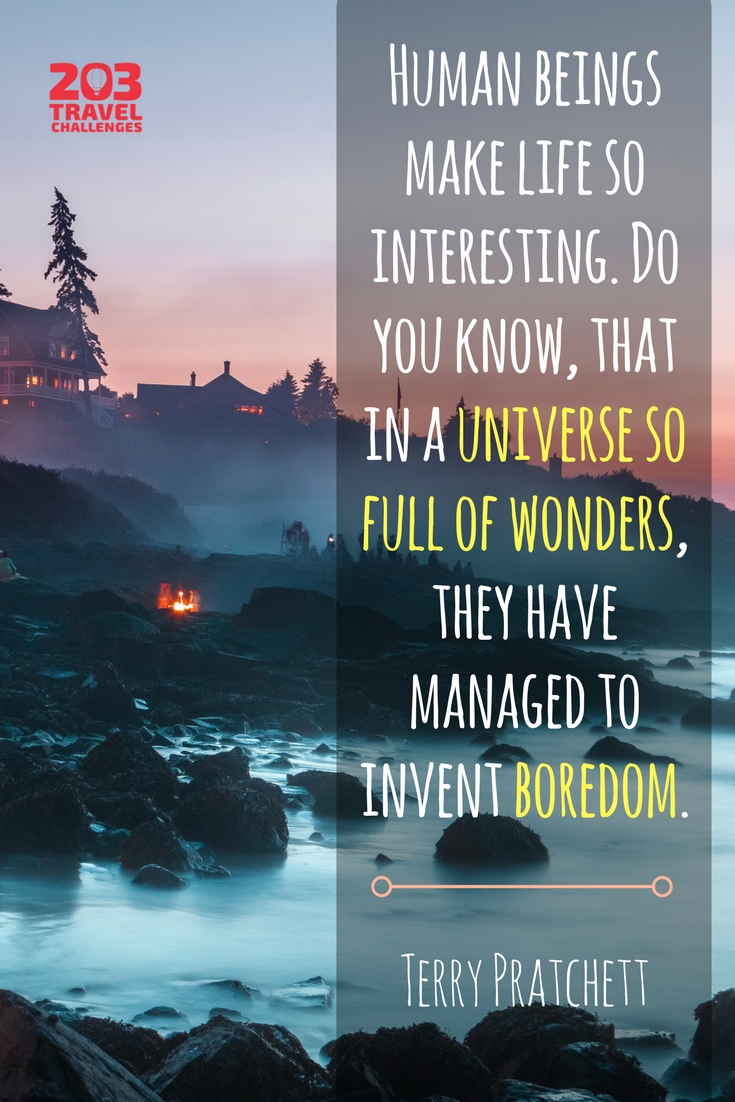 “Everything looks interesting until you do it.”

“If cats looked like frogs we’d realize what nasty, cruel little bastards they are. Style. That’s what people remember.”

When you keep on postponing that amazing trip, remember that…

“Inside every old person is a young person wondering what happened.”

“If you don’t turn your life into a story, you just become a part of someone else’s story.” 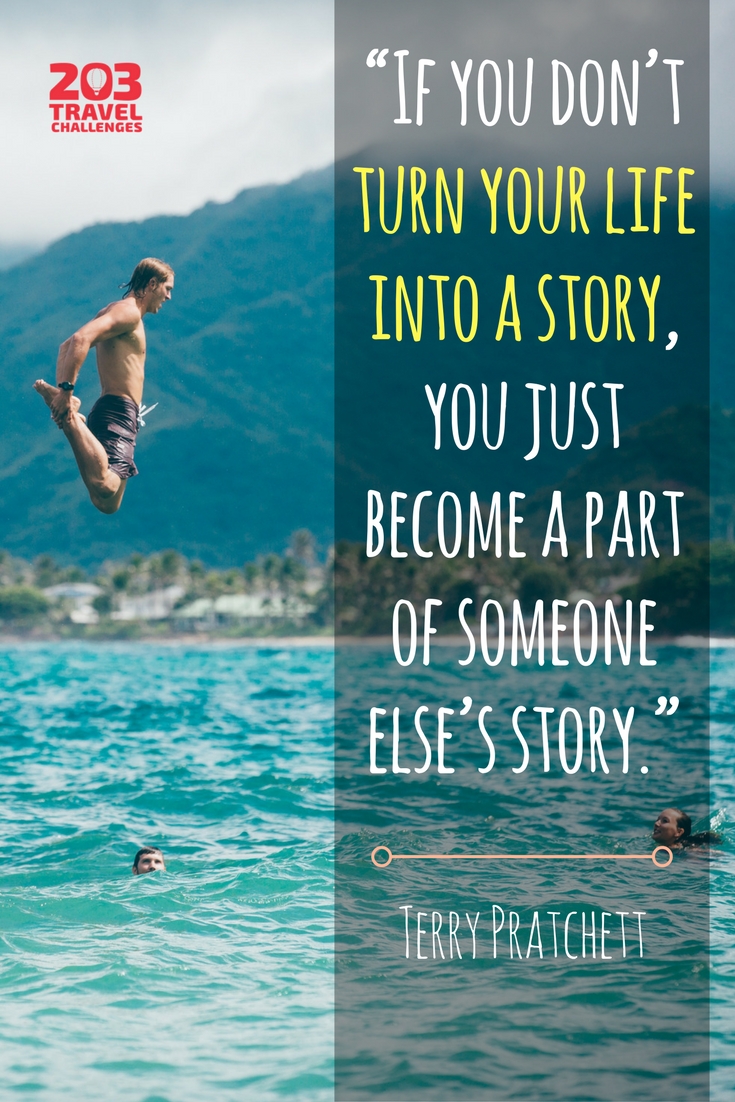 “It is often said that before you die your life passes before your eyes. It is in fact true. It’s called living.”

“So much universe, and so little time.”

“When in doubt, choose to live.”

Pin it for later to your travel or Terry Pratchett board:

How to Stream While Traveling? 0

The Sacred Island of Delos near Mykonos 0

Curie Museum in Paris – a radioactive tour you take voluntarily 0