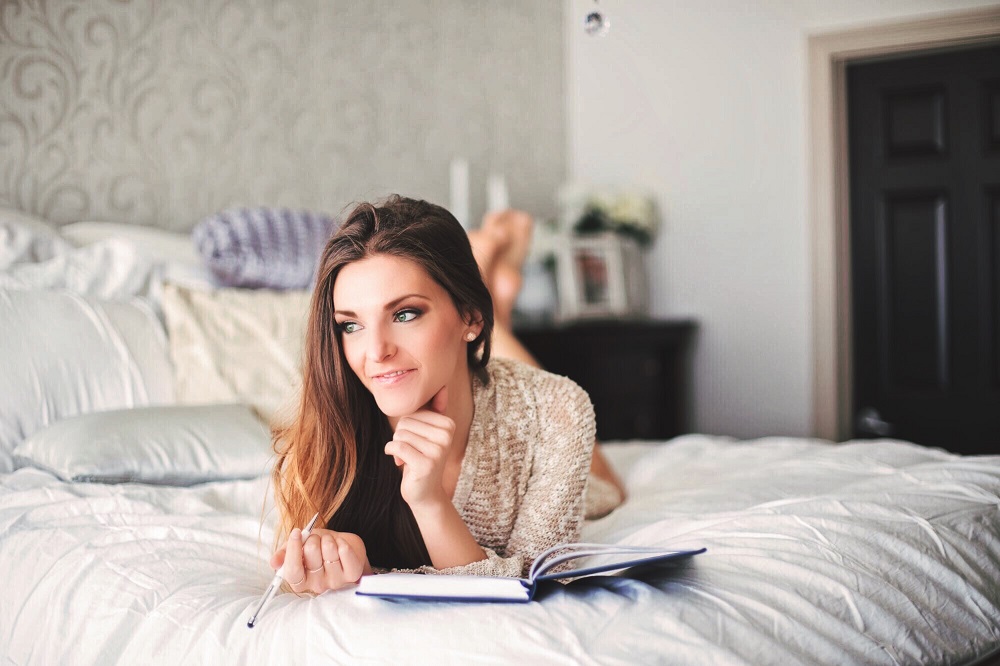 The joy of being a high maintenance minimalist on the road

Minimalism has become a really big thing now but if you still need some inspiration to embrace it, we’ve discovered the best source. It’s a book and it’s called “The High Maintenance Minimalist” by Kashlee Kucheran. Read a short excerpt from it and find your personal drive to make a change and live the life you have always dreamed of.

Who doesn’t dream of selling everything, not owing a cent to anyone and just traveling the world? Packing your suitcase, grabbing your passport and just heading out into the horizon. I couldn’t even count how many times that wanderlust fantasy has gone through my mind, usually while stuck at work. Somewhere deep inside of me I knew that living a life of freedom was possible, even for the average Joe, and if I wanted it badly enough, it would come to pass. I made vision boards, watched ‘The Secret’, read ‘The 4 Hour Work Week’, and did everything else I could to manifest the type of life I was destined for.

To be where I am now, traveling full time with my incredible husband, being debt free and living every day with more purpose…. It just brings tears to my eyes.

Without getting to woo-woo on you, it’s hard to put into words how much better I feel without so much STUFF weighing me down. It’s been incredibly life changing. The kind of life changing that makes me want to sit in a circle in the park, holding hands with strangers and sing songs about it.

I used to feel like I was in a prison cell that was only 4 feet tall, making me crouch all day long, with weighted shackles pulling at my ankles and wrists. Now it feels more like my cell doors have been opened, all the guards have disappeared, and I am free to leave and explore the world as I see fit. There is a curiosity that wasn’t there before; an influx of creative energy and mental stability. Even physically, I FEEL more capable and powerful in day to day life. I’m more alive, more alert, more focused. I get more done with the hours of my day then I used to in months. It’s truly sensational.

I’m not screwing with you.

If you would have told me in the middle of my materialism high that I would feel better without all that stuff in my life I would have told you off. I would have chalked it down as your weakness, convincing myself you were only jealous of all the cool stuff I had and just wanted me to give it all up.

You would have been dismissed by me as a hippy quack.

I’m happy to have lived on both ends of the spectrum so I can truly appreciate the freedom of living with less. It gives me a higher level gratitude for the hard work and sacrifice in order to get to this point.

We finally succeeded in taking the plunge into freedom at a level neither of us could have fathomed, and it was all because of minimalism.

Is Minimalism the Answer?

When I first heard about minimalism, I was immediately turned off. I imagined someone who lived in a sterile white room, with a single tiny mid-century modern orange chair, who owned exactly 2 pairs of pants, 1 notepad to scribble deep prose in and zero friends. He lived in an oversized tin can in the woods, had the very definition of a hipster beard and ate positive affirmations for breakfast.

I was much happier buying things I liked, going on shopping sprees, adding yet another pair of shoes to my walk in closet, picking up extra shifts to try and make an embarrassing low dent in my debt… oh dang… no I wasn’t!

Thankfully, I didn’t have to grow a hipster beard in order to start embracing minimalism. There are no rules. I’d look pretty hot with a beard though.

Minimalism is another way of life. It’s not ‘one size fits all’ and it can be customized for your own personal goals.

Personally, here are the reasons I wanted to learn to embrace minimalism:

To feel lighter. I started experiencing this immediately! It’s like a new corner of my mind opened up to allow more creative and positive thoughts as more and more physical junk cleared out. Items were weighing me down mentally and emotionally.

To be more location independent. Nothing says ‘stay home and go nowhere’ quite like a huge mortgage payment. I feel strangely at home in hotels. I love living out of a suitcase and have no qualms about long flights to exotic locations. I always say the same thing when any vacation or adventure is coming to an end, which is: “I don’t want to go home!”… .so why do we then? I guess the answer is most of us have a mortgage, bills, a mile long ‘to-do’ list, and things that need our attention, so we must return (or so I thought). For my lifestyle, I found the removal of a permanent home and all the bills that came with it, allowed Trevor and I to travel a lot more without worry, pressure and stress. Because we are the types of people who don’t need the security of one ‘forever’ dwelling, we found it was shackling us to a particular location more than we would have liked. Now with the removal of a mortgage, the interest on that mortgage, property taxes, energy bills, gas bills, water bills, condo fees, cable bill, internet bill, repair bills, upgrade costs and all the other delights that come with home ownership, we can travel more and not feel guilty about it!

To take back control. Being bombarded with advertisements and feeling pressured and compelled to take action on them is a shell of an existence. I don’t want to be that zombie consumer, drooling all over myself, on the hunt for discount brains. I used to be addicted to that dopamine RUSH of purchasing and unboxing something new. So crisp and clean. Sigh, it felt like true happiness. That was until the chemical romance subsided 10 minutes later and the only way to get it back was to buy something else. Talk about a loss of control!

To live life on my terms. It’s my life. I want to make the most of it. I don’t want to limit my abilities to see and experience the world because of one too many shopping sprees. If I had known that a storage unit filled with forgotten items was costing me the equivalent of a Mediterranean Cruise each year, I would have emptied that thing out sooner! When I am an old geezer on my death bed, I won’t be thinking about that Pottery Barn coffee table I went into overdraft for, I’ll be mentally flipping through my scrap book of memories, picturing the wonderful adventures I had with people I love. 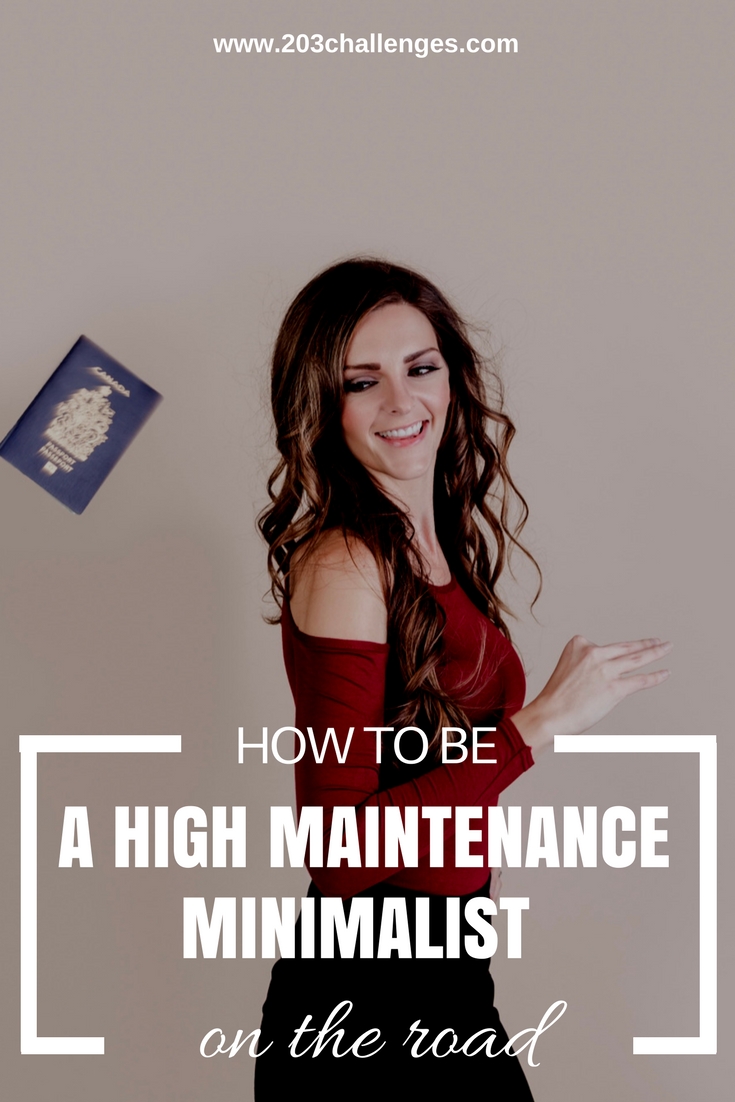 Learning to embrace elements of minimalism has allowed me to do things I never thought possible, in a rather shallow way as well. Trevor calls me ‘The High Maintenance Minimalist’ and it’s so true! This girl likes the finer things in life!

I will never be a backpacker in khakis checking into some eco-hut with no running water or electricity. Ever! If you want me to be really honest, it’s hard enough getting me into anything less than a 3-star hotel. But just because I might be a little high maintenance, doesn’t mean I can’t apply elements of minimalism to my life.

I have a deep love for cool experiences, like snuggling up in a lay flat first class seat on a long flight, that I would never be able to afford had it not been for minimizing my life in others ways.

Some people think it’s absolutely ludicrous to spend thousands on an airplane ticket or a private guided tour of a city and that’s just peachy with me. I happen to feel the same about surrounding myself with pointless garbage.

Minimalism has given me the hall pass to spend my hard earned money on crazy life events. It also showed me that I don’t have to OWN everything I might find incredible. If I want to take a ride in a sweet speed boat, we can rent one instead of borrowing insane amounts of money to ‘own’ one, just to get sick of it in a few years. If I want to experience what it’s like to wake up in an ocean front villa, we can stay at one for a month without having to mortgage myself to the eyeballs to buy one. I don’t feel compelled to ‘own’ everything I find cool or interesting.

I have style and flair and that is okay. I choose a silk top instead of a hemp flannel shirt and there is nothing wrong with that. I’ve managed to eradicate debt, give up 95% of my stuff, be completely location independent and learn to live with less, so I’m not going to get hung up on what minimalists look like in the dictionary. I am that girl who might live out of two suitcases, but you can bet they are packed with selective high quality things and getting loaded on a plane to an exotic destination.

I’m still going to buy anti-aging face creams, go for overpriced massages, and upgrade my train tickets. I don’t need to choose between being an in debt shopaholic or living in a treehouse with dreadlocks. Nobody does. I’ve found the balance between these two lifestyles and it’s allowing me to be who I really am, and that’s the High Maintenance Minimalist.

India through the eyes of a little girl (VIDEO) 0

Malmo – attractions for a weekend 0

Visit these 5 little-known but great places in Romania 0