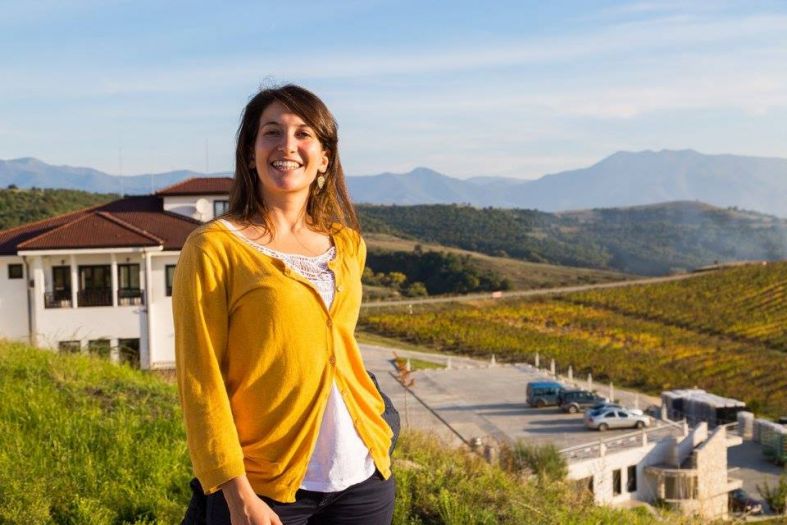 203 Challenges 0 March 8, 2017 11:17 am
How to plan a grand adventure – step by step
8 meaningful travel experiences to enrich your life
3 unique hostels in Colombia to kick back and relax

Militza Zikatanova is a truly inspiring person. She knows wine, travel and adventure, as well as business. She graduated from Boston University and worked abroad for a few years, but eventually returned to her home country Bulgaria, Europe, so that she can join her family’s Wine Cellar Villa Melnik. You can catch her both carrying a basked full of grapes during harvest, and also taking care of marketing.

In order to convey some of the incredible positive energy that Militza emanates, we asked her about her life, her travels, life in Boston (she gave us precious advice through the eyes of a local), and the fears she had to conquer on the way.

– I was born in Sofia. I got my high-school diploma from the American College of Sofia, followed by a Bachelor Degree in Business Administration from Boston University, USA. Upon graduating, I accepted a job with Diageo, one of the world’s top alcohol companies (owner of brands such as Smirnoff, Johnnie Walker, and Guinness), as part of Diageo’s leadership development program for recent graduates. I worked at Diageo for three years and was rotated through three different positions in three cities across the UK. I was their sales rep in Liverpool, part of the Marketing team in Belfast, Northern Ireland, and a key account executive in London. In September 2015 I returned to Bulgaria in order to join the family business – Wine Cellar Villa Melnik. Now I try to take part in all aspects of the business, from vine-growing and wine-making, to sales and marketing.

– Why did you return to Bulgaria?

– The truth is, I never questioned whether I will return to Bulgaria. I was determined to study abroad and gain work experience abroad, so that one day, I would be able to join the family business and make a real, valuable contribution. I believe that when you work for yourself and your family, you feel truly fulfilled. I also believe that the sense of belonging to one’s origins and birthplace is a very powerful driver for a person.

– Who is Militza in Bulgaria and what gives her the courage to stay here?

– Militza in Bulgaria is an optimistic enthusiast who really, really wants to make a positive difference and to be part of the new wave of Bulgarians. After having lived abroad for seven years, I don’t want to have the attitude that I’m “going back” to Bulgaria. I want to believe that I’m “going to Bulgaria”: I want this to be a new big adventure for me. I know that, like all adventures, it will have its moments of difficulty and challenges, but it also gives me a sense of accomplishment and above all, the self-confidence that I am here by my own choice, and that I am responsible for my own destiny.

– Choose one of the cities where you’ve lived and tell us about it. Why did you choose this city and how will it remain in your heart?

– I want to tell you about Boston because I spent four of my most wonderful years there. I chose to study in the States because I thought that it was the best place to study business, and I chose Boston in particular because it is one of the most beautiful and European-like cities in the US. Boston is on the East Coast, in Massachusetts, and the Charles River flows through it. It is a city of students and entrepreneurs, so it is vibrant, full of life. Boston is home to Harvard, MIT, Boston University, Northeastern, Boston College, Suffolk, and many other universities. It is the place where some of the world’s most influential companies were founded. The city is a melting pot of nationalities and diverse people, which broadens your horizons both culturally and intellectually. At the same time, the city is relatively small, quaint and charming, which makes it stand out among many other fast-paced, stressful American cities.

The first place, where I ll take you in Boston is… Quincy Market, this historic indoors market at the heart of Boston. It is surrounded by many bars and restaurants where you can enjoy a meal and also see lots of street artists and performances. From there, you can go to the North End (the Italian neighbourhood) for some delicious cannoli or head south through the Boson Common public gardens. During the summer, you can ride the Swan Boats in the lake, and during the winter, you can ice skate on the Frog Pond. Next, continue to the fashionable Newbury Street for some high-end boutique window-shopping and bubble tea (a tea infusion with tiny tapioca balls). End the day at one of the many theatres in Boston, at an Irish bar, or at some of the “wicked good” clubs on Boylston Street (most of which, of course, close at 2AM. This is Boston after all, not Las Vegas).

When I want some peace and quiet, I… go to a gallery or an artsy tearoom in Cambridge, a city within the Boston metropolitan area, situated on the opposite bank of the Charles River. MIT and Harvard are here, so the place is full of hipster bars, independent restaurants, and coffee shops where hippies and yuppies meet up over large cups of Americano to brainstorm the next big startup (Zuckerberg founded Facebook here).

Don’t forget to take a picture with… a whale! Take a whale-watching boat trip from the Boston Harbour to catch a glimpse of a humpback whale or dolphins.

If you can try a single thing from the local cuisine… for a starter, try the clam chowder (the locals pronounce it “chowdah”), a thick soup with clams, cream, and potatoes. For your main, have the lobster: they bring the whole thing, a big red steamed lobster on a plate, along with metal crackers for the claws and a baby’s bib because you are guaranteed to spray yourself and everybody around with lobster sauce as you try to crack those claws to take out the precious bits of tasty meat from inside. For desert, get the key lime pie. The beverage, of course, is a Sam Adams, the flagship craft beer from Boston.

The people from Boston would never… give a Yankees fan the real directions to Fenway Park, the legendary Red Sox stadium (the baseball feud runs way too deep) .

Few people know that… only some 40 km away from Boston is Plymouth, the place where some of the first migrants to America, the Mayflower Pilgrims, disembarked in 1620 and set the foundations of what was to become colonies and later, a new country. There is also the Plimoth Plantation, a Native American living history museum where you can learn more about the Native’s culture. Notably, Boston has played a very important role in American history as the revolution against the British began here with the famous Boston Tea Party. Today, there are monuments dedicated to the heroes of the revolution like Sam Adams, Paul Revere, and John Hancock throughout the city. Follow the Red Trail (literally, a red line drawn on the sidewalk going through the city), and it will take you on a journey through the top historical sites.

In spring… it is perfect for walks by the promenade along the Charles. This is the time when the magnolia trees are in bloom and the entire streets are covered in pink and white flowers that give out an incredible scent. There are hundreds of sailboats and kayaks on the river. In the evenings, there are concerts in the open by the Hatch Memorial Shell, a lovely half-dome outdoor stage in the park.

In summer… it is super hot and humid and sometimes you get almost tropical showers. But once you get inside an office or a restaurant, you freeze to the bone because Americans keep the AC to about 18°C. So bring layers of clothes.

In autumn… get in a car and go on a roadtrip to enjoy the views. Massachusetts is famous for its amazing fall colors, and people go to the forests outside Boston just to see how the leaves of the trees have changed color.

In winter… you can get up to two meters of snow cover. I’ve been there when we were completely snowed in and people had to jump out of the windows from the second floor because the front door was blocked with snow. And the winds blowing from the Atlantic are just a killer. That’s why the weather forecast tells you not only about the negative temperatures but also about the windchill, which signifies the perceived decrease in temperature due to the exposure to strong winds. Or, it may be -10°C outside, but because of the strong wind, it will feel like -25°C.

Only in Boston you can get… a whole subway train (which Bostonians affectionately call The T) full of Red Sox fans singing together as they go towards Fenway Park. A baseball game goes on for at least four hours, during which you have to have a hotdog with lots of onion, pickled relish, ketchup and mustard, as well as a big glass of diluted American beer. There are people dresses as team mascots, cheerleaders, Mexican waves, Subway bazookas that shoot foot-long sandwiches in the audience, marriage proposals on the big screens during the half-time shows, and all sorts of other fun things!

Of course, it’s equally entertaining to attend a Celtics basketball game or a Patriots American football match – Bostonians are really passionate about their sports!

Tell us about conquering your fears. Some of my fondest memories from Boston are of sailing on the Charles in springtime, with the magnolias blooming by the river and the beautiful views of the skyscrapers in the Financial District. But it was a challenge to earn these memories. My story is this: in order to sign up for the sailing classes and learn to sail, I had to first pass a swimming test, during which I was shocked to realize that “doggy style” doesn’t really count as swimming according to the examiner. So I spent about a year learning and practising different swimming styles in the university pool, where I even ended up winning a prize at a swimming contest. Eventually, I earned my spot in the sailing class and was very proud of myself!

I didn t stop there with the water sports – I soon discovered my passion for scuba diving, which has since given me a great reason to visit exotic places like Bali and the Galapagos. So Boston, with its marine-centric culture, the proximity of the Atlantic, the Charles River and Cape Cod, the whale-watching and the seafood, has really taught me to love the sea and to always want to be close to it.

Loading...
Newer Post
12 facts that you will believe in only when you live in the USA
Older Post
This inspiring couple explores the world by bus for 8$ a day

9 real hitchhiking stories that will make you laugh and cry

How will weekend breaks change post-COVID?