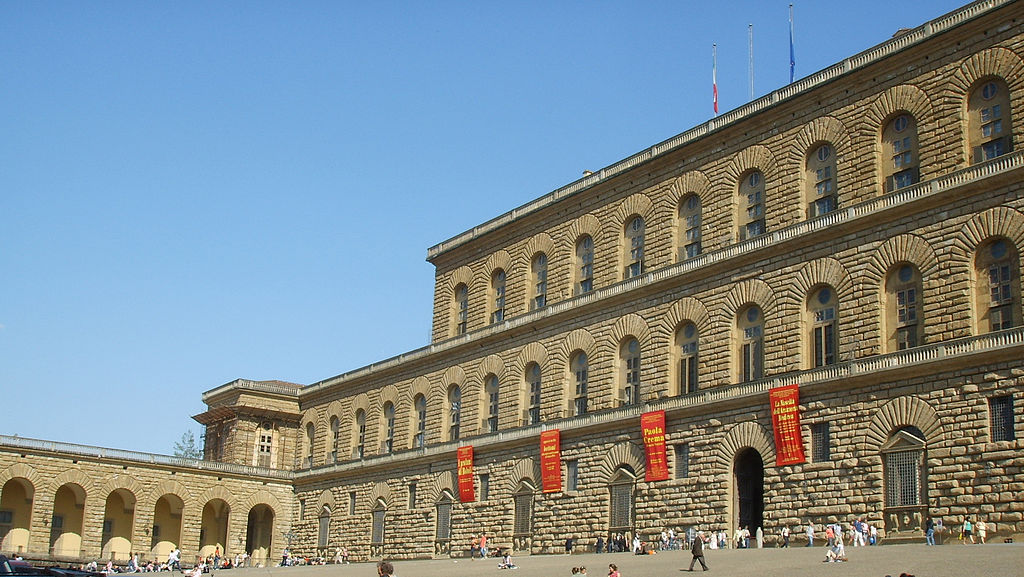 Originally built by banker Luca Pitti in the 15th century Palazzo Pitti was purchased in 1550 by Eleanor of Toledo, wife of Grand Duke Cosimo I de’Medici, who desired a more modern home away from the ‘old’ apartments of Palazzo Vecchio. They doubled the building in size to become the most grandiose palace in Florence, a symbol of their power and the new Grand Ducal residence. The facade is striking and imposing when approached from the palace entrance, it’s stone piazza a popular spot to sun yourself between gallery visits.

Within Pitti is five museums, making it the largest exhibition complex in Florence. Treasury of the Grand Dukes has exquisite quadrature drescoes and priceless jewelry including 16th-century gems once belonging to Anna Maria Luisa de’Medici. Upstairs is Gallery of Modern Art, Museum of Costume and Fashion, and the Royal and Imperial Apartments, kept in their original 18th-century style since the House of Lorraine – Habsburg called Pitti home. In the Palatine Gallery 500 masterpieces by Raphael, Titian, Caravaggio, and Rubens, once part of the Medici collection, hang in ostentatiously decorated rooms. Napoleon, in his quest to expand the French Empire, used the palace as his Florence base between 1799 and 1814 (his private bathroom remains) while out back, the Boboli Gardens is a green respite from the city’s cobbled streets.

See more in Lost in Florence: An Insiders Guide to the Best Places to Eat, Drink and Explore by Nardia Plumridge

London: 22 free museums and galleries for a ticket-free cultural day 1