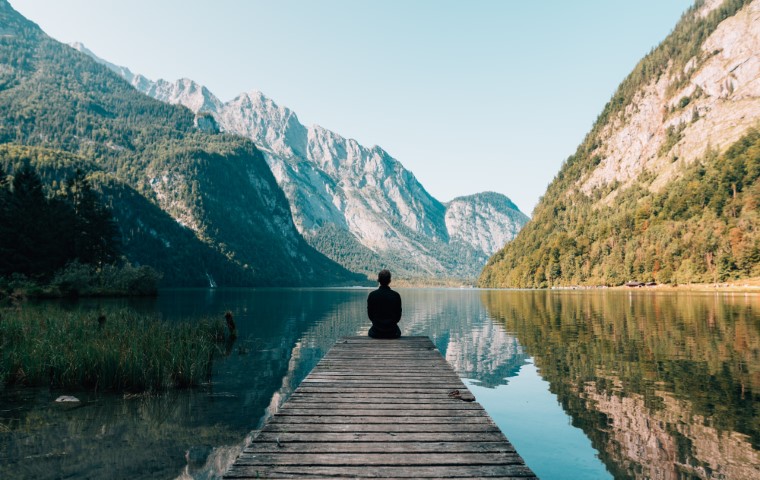 Freeing yourself from your mind

203 Challenges 0 March 29, 2022 8:04 pm
7 free travel tools you may not be using (other than Couchsurfing)
This is why you should ditch the camera on your next trip
5 quotes about meditation from Pema Chödrön

What exactly do you mean by “watching the thinker”?

When someone goes to the doctor and says, “I hear a voice in my head,” he or she will most likely be sent to a psychiatrist. The fact is that, in a very similar way, virtually everyone hears a voice, or several voices, in their head all the time: the involuntary thought processes that you don’t realize you have the power to stop. Continuous monologues or dialogues.

You have probably come across “mad” people in the street incessantly talking or muttering to themselves. Well, that’s not much different from what you and all other “normal” people do, except that you don’t do it out loud. The voice comments, speculates, judges, compares, complains, likes, dislikes, and so on. The voice isn’t necessarily relevant to the situation you find yourself in at the time; it may be reviving the recent or distant past or rehearsing or imagining possible future situations. Here it often imagines things going wrong and negative outcomes; this is called worry. Sometimes this soundtrack is accompanied by visual images or “mental movies.” Even if the voice is relevant to the situation at hand, it will interpret it in terms of the past. This is because the voice belongs to your conditioned mind, which is the result of all your past history as well as of the collective cultural mind-set you inherited. So you see and judge the present through the eyes of the past and get a totally distorted view of it. It is not uncommon for the voice to be a person’s own worst enemy. Many people live with a tormentor in their head that continuously attacks and punishes them and drains them of vital energy. It is the cause of untold misery and unhappiness, as well as of disease.

The good news is that you can free yourself from your mind. This is the only true liberation. You can take the first step right now. Start listening to the voice in your head as often as you can. Pay particular attention to any repetitive thought patterns, those old gramophone records that have been playing in your head perhaps for many years. This is what I mean by “watching the thinker,” which is another way of saying: listen to the voice in your head, be there as the witnessing presence.

When you listen to that voice, listen to it impartially. That is to say, do not judge. Do not judge or condemn what you hear, for doing so would mean that the same voice has come in again through the back door. You’ll soon realize: there is the voice, and here I am listening to it, watching it. This I am realization, this sense of your own presence, is not a thought. It arises from beyond the mind.

So when you listen to a thought, you are aware not only of the thought but also of yourself as the witness of the thought. A new dimension of consciousness has come in. As you listen to the thought, you feel a conscious presence — your deeper self— behind or underneath the thought, as it were. The thought then loses its power over you and quickly subsides, because you are no longer energizing the mind through identification with it. This is the beginning of the end of involuntary and compulsive thinking. When a thought subsides, you experience a discontinuity in the mental stream — a gap of “no-mind.” At first, the gaps will be short, a few seconds perhaps, but gradually they will become longer.

When these gaps occur, you feel a certain stillness and peace inside you. This is the beginning of your natural state of felt oneness with Being, which is usually obscured by the mind. With practice, the sense of stillness and peace will deepen. In fact, there is no end to its depth. You will also feel a subtle emanation of joy arising from deep within: the joy of Being. It is not a trancelike state. Not at all. There is no loss of consciousness here. The opposite is the case. If the price of peace were a lowering of your consciousness, and the price of stillness a lack of vitality and alertness, then they would not be worth having. In this state of inner connectedness, you are much more alert, more awake than in the mind-identified state. You are fully present. It also raises the vibrational frequency of the energy field that gives life to the physical body.

As you go more deeply into this realm of no-mind, as it is sometimes called in the East, you realize the state of pure consciousness. In that state, you feel your own presence with such intensity and such joy that all thinking, all emotions, your physical body, as well as the whole external world become relatively insignificant in comparison to it. And yet this is not a selfish but a selfless state. It takes you beyond what you previously thought of as “your self.” That presence is essentially you and at the same time inconceivably greater than you. What I am trying to convey here may sound paradoxical or even contradictory, but there is no other way that I can express it.

Ekhart Tolle – The power of now

The Best Tips for Renting a Car in Chicago 0

Interview with the ‘203 Travel Challenges’ authors 0